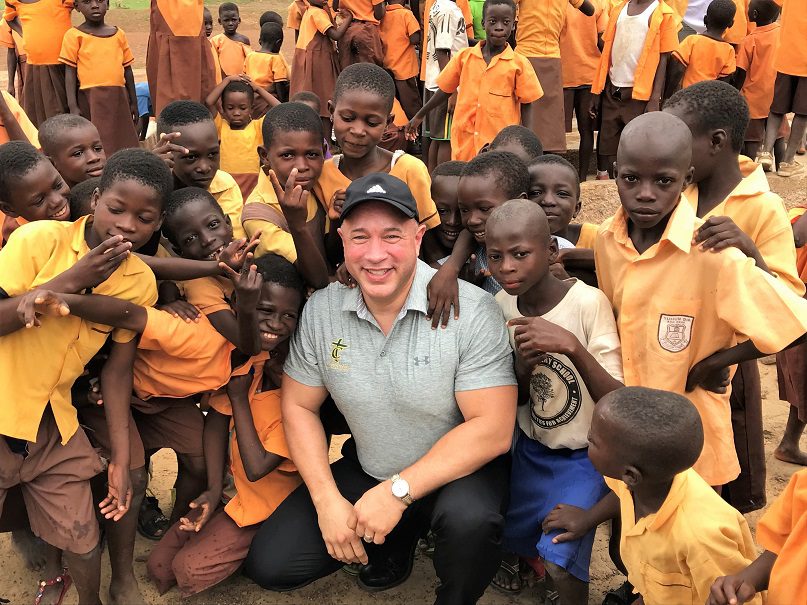 Huge smiles, hugs, peace signs – it’s a celebration for something many of us take for granted every single day – clean, cool drinking water. Superintendent of Catholic Schools, Henry Fortier, just returned from mission in Ghana eager to share the details of this life-changing experience. “They were so happy,” he said thinking of the children. “You would have thought it was Christmas because they got to run over to the well. It was very moving.”

Fortier and a handful of teachers were in Africa for 10 days in early July, learning how spare change given to Catholic Relief Services (CRS) truly transforms the world. “We were in a very remote area… very, very poor,” explained Fortier. The team soaked in every moment as CRS workers swooped into small, tribal communities for simple lessons like hand-washing.

It’s a life-saving operation. One by one, each community is digging proper latrines and assembling basic sanitation stations to try and stamp out cholera in the area. Fortier choked up remembering special moments when children learned they would no longer have to use the restroom in the streets. Rich in spirit, the little ones would tackle Fortier while laughing, and urge him to snap photos. When asked to describe that moment he simply said “joy.”

This trip will now turn into teaching moments here in the Diocese of Orlando. Fortier plans to share his journey with fellow educators at Teacher Kickoff Day August 8th. His goal is to inspire school leaders to truly understand the importance of the CRS Rice Bowl program and to put more energy into collection efforts during Lent next year. “As a young student, I knew the spare change went to help starving children in different countries, but now I’ve seen firsthand and truly understand,” explained Fortier.

The missionaries also witnessed how CRS has trained farmers in parts of Ghana to plant smarter. Machinery is now being assembled there to cut down the harvest time of soy beans from more than a week to just one day. The next goal is to yield even more crops for revenue and start working on the people’s wish list – better education and greater opportunities for children.

It will be an astounding feat for a country with an extremely high illiteracy rate and where dozens of different languages are spoken in towns very close to one another. The common language is English, but much of the population is uneducated and cannot speak it.

Poor communication and a lack of resources also explains less than adequate healthcare. CRS is partnering with the local health department to create community centers to treat the sick, but there are not enough nurses or hospital supplies. Fortier noted the situation is so severe that x-rays are placed outside to dry on broomsticks.

CRS has been working in Ghana for 60 years now, since the country gained its independence in 1958. Progress is glacially slow, but intentional. Doctors are now trying to ramp up prenatal care for expectant mothers after tribal leaders allowed to them to disclose their pregnancy much sooner.

“5,500 miles apart, their hopes and dreams are no different than ours, but very challenging when faced with poverty and famine,” said Fortier. Now that’s he’s back in Central Florida, the superintendent plans to push Catholic schools to further support our brothers and sisters in need. “The image that kept coming to me was God’s family tree and that this was just another branch of God’s family tree.”