Edwin Cardona to be ordained Sept. 6 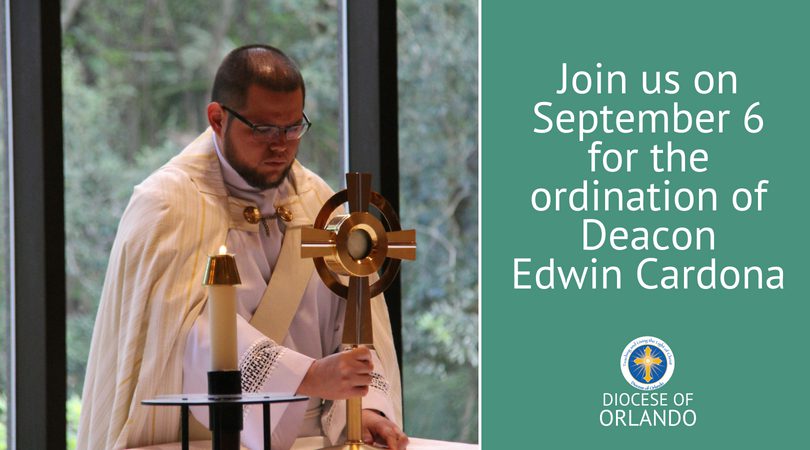 Transitional Deacon Edwin Cardona has been discerning priesthood since his senior year in high school. That dream will finally become reality on Sept. 6.

He recalled the year he felt God knocking on his door as a particularly formative time in his formation. “I started learning a lot about my faith,” he said. “St. Catherine of Siena (Parish) in Kissimmee really started becoming my family, my extended family. And the more I got to know them, the more they started to notice some gifts in me, some things that would make me a good priest.” He admits, at first, he was not convinced.

Then Father Joseph Bellerive invited Cardona to visit St. John Vianney College Seminary in Miami. The faith of the seminarians and their warm hospitality convinced him to answer God’s call, but family weighed heavily on Cardona’s mind. His brother, Ronal, died that same year. The loss unified his family in a powerful way and made leaving for the seminary very emotional. However, Cardona found solace with his fellow classmates and spiritual direction that helped him grieve. He even shared what he learned with others in bereavement ministry.

It was not just immediate family Cardona had to part with, he also had to learn to say goodbye to the family he dreamed he would have one day – the children he always wanted. “In hind sight, I can see how that challenge was calling me to have a deeper appreciation for the vocation of marriage,” he explained. Upon deeper reflection and prayer, he said, “I came to see it as something beautiful, as God’s gift for me to serve families.” He also shared he has always idolized hard-working, dedicated, and self-sacrificing people. “The Lord has always helped me be someone who is loyal, be someone that people can count on,” he acknowledged. He plans to use those strengths when he becomes a priest.

Cardona also plans to lean on the Blessed Mother in his vocation. From an early age he was raised with a great devotion to Our Lady Queen of Peace, the patroness of El Salvador. “I always felt like she had her mantle over me,” he noted. His parents’ participation in missions to their homeland were also a model of Christian charity for him. He especially cherished summer visits with relatives during the celebration of the Feast of Our Lady of Mount Carmel. “Being able to serve Mass, being able to go with the priests and visit the sick and be a part of the festivities, walking the procession with the families, and basically the whole town… It was very, very important for me to experience that lived faith in another culture, my culture.”

Finally, he credits his many priestly mentors for helping pave the way. “(They) have helped me to realize that we have to be led first, like those first disciples,” he said. “To be invited and to be called and to say, ’Yes’, and to not be afraid to leave everything behind and to know that you’ll be given so much more.” He added, “This life brings a lot of blessings and sometimes it brings some grief. It brings some difficulties and I believe that those sacrifices are worth it—especially if they help you deepen your love for God. That sacrifice is made easy with great love.”

Deacon Cardona will be ordained to the priesthood at Corpus Christi Parish in Celebration on Sept. 6 at 10:30 a.m.

By Glenda Meekins of the Florida Catholic – August 8, 2018