He said his time with the founder of the Missionaries of Charity, Mother Teresa, who died in 1997 and was beatified in 2003, was all about “listening and being attentive to the will of God and communicating it through a story.” 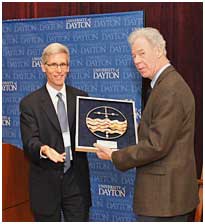 He said his time with the founder of the Missionaries of Charity, Mother Teresa, who died in 1997 and was beatified in 2003, was all about “listening and being attentive to the will of God and communicating it through a story.”

Doblmeier (pictured below) made the remarks March 8 at the University of Dayton, where he received the Daniel J. Kane Religious Communications Award for outstanding lifetime dedication to Gospel values using mass media.

Doblmeier’s productions include: Bonhoeffer , about the German theologian and Nazi resister Dietrich Bonhoeffer; The Power of Forgiveness , which includes the story about a Muslim who decided he would forgive and reconcile with the grandfather of the boy who killed his son; and The Adventists chronicling the history and contemporary story of Seventh-day Adventists.

The award is named for the former communication director for the Archdiocese of Cincinnati. In the 19-year history of the award, recipients have included film producers, publishers, media literacy figures as well as the press coordinator for the Vatican and retired Archbishop Daniel E. Pilarczyk of Cincinnati.

Doblmeier, founder and president of Journey Films in Alexandria, Va., gave a talk titled “Through the Lens of Faith” and presented portions of his films at the university as part of the Virtual Learning Community for Faith Formation annual conference.

“I actually don’t think of myself first as a documentary filmmaker,” he said. “I think of myself as someone who wants to explore how God is present in our world today and how people act out of their own search for the divine in their lives. To me, that is endlessly fascinating.”

He described documentary filmmaking as a very visual medium that “can do a wonderful job of telling stories about things on the surface.”

“Spirituality is something deeper, often hidden deep within,” he said. “But if we do it well — if we are able to convey those things that are most personal and spiritual — it can be a very moving experience for a viewer.”

He told diocesan educators from around the nation that he has been transformed by the stories he’s told. He added that he would be the first to concede how difficult it is to capture spirituality on film because it is so personal.

In addition to winning an Emmy for his documentary “Washington National Cathedral,” Doblmeier is a six-time winner of the Gabriel Award for best film on a religion topic from the Catholic Academy of Communication Arts Professionals and a two-time winner of the Religious Communicators Council’s top award.

Journey Films is a film and television production company that focuses on religion, faith and spirituality and their role in today’s world. Since beginning Journey in 1984, Doblmeier has produced more than two dozen award-winning films that have taken him to more than 45 countries, profiling Nobel laureates, leading religious figures and heads of state.

“He is an articulate and prophetic storyteller and filmmaker for the 21st century who captures the religious perspective and sensitivities of his audiences,” said Sister Angela Ann Zukowski, a member of the Mission Helpers of the Sacred Heart, who is director of the Institute for Pastoral Initiatives.

“We need this religious dimension in our stories, and we need people like Doblmeier to remind us of those who made their mark in history, who became our heroes, and to remind us that we too are called to holiness and greatness,” she said in a statement.

The university’s Virtual Learning Community for Faith Formation is an online program open to anyone that offers adult religious education and faith formation training. It serves Catholics seeking to grow in their faith and those serving in pastoral leadership roles. The program has more than 50 diocese partners in the United States and reaches into 182 Catholic dioceses and more than 40 countries.