Eucharistic Communion and Contemplation Are Inseparable 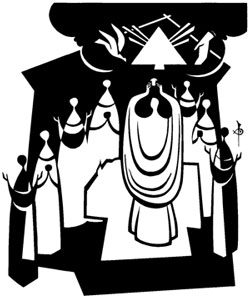 During the liturgical celebration, the Pope pronounced a homily in which he focused on the sacredness of the Eucharist, and in particular on the adoration of the Blessed Sacrament.

“A unilateral interpretation of Vatican Council II has penalized this dimension”, the Holy Father explained, “effectively limiting the Eucharist to the moment of celebrating Mass. It is, of course, very important to recognize the importance of celebration, in which the Lord calls His people, bringing them together around the table of the Word and Bread of life, nourishing them and uniting them to Himself in the sacrificial offering. This interpretation of the liturgical gathering, in which the Lord works and achieves His mystery of communion, naturally retains all its validity, but a rightful balance must be restored. … By concentrating our relationship with the Eucharistic Christ only on Mass we run the risk that the rest of time and space is emptied of His presence. Thus our perception of Jesus’ constant, real and close presence among us and with us is diminished”.

“It is a mistake to establish a contrast between celebration and adoration, as if they were in competition with one another. The opposite is true. The cult of the Blessed Sacrament represents the spiritual ‘environment’ within which the community can celebrate the Eucharist correctly and truthfully. Only if preceded, accompanied and followed by this interior attitude of faith and adoration, can liturgical activity express its full meaning and value”, the Pope said.

He then went on to explain that, at the moment of adoration, we are all at the same level, “on our knees before the Sacrament of Love. The common and ministerial priesthood come together in the cult of the Eucharist. … By remaining together in silence before the Lord, present in His Sacrament, we have one of the most authentic experiences of being Church, one that is complementary to our celebration of the Eucharist. … Communion and contemplation cannot be separated, they go together”, and if contemplation is lacking “even sacramental communion can become a superficial gesture on our part”.

Turning then to consider the sacredness of the Eucharist, Benedict XVI noted that here too, in the recent past, there has been “some misunderstanding of the authentic message of Holy Scripture. The Christian novelty of worship has been influenced by a certain secularist mentality of the 1960s and 1970s. It is true, and it remains valid, that the centre of worship is no longer in the ancient rites and sacrifices, but in Christ Himself, His person, His life, His Paschal Mystery. Yet this fundamental novelty must not lead us to conclude that the sacred no longer exists”.

Christ “did not abolish the sacred but brought it to fulfillment, inaugurating a new worship which is entirely spiritual but which nonetheless, as long as our journey in time continues, still uses signs and rites. These will only fall into disuse at the end, in the celestial Jerusalem where there will be no temple”.

Moreover, the Holy Father went on, “the sacred has an educational function. Its disappearance inevitably impoverishes culture, and especially the formation of the new generations. … Our Father God … sent His Son into the world, not to abolish the sacred but to bring it to fulfillment. At the culmination of this mission, at the Last Supper, Jesus established the Sacrament of His Body and His Blood, the Memorial of His Paschal Sacrifice. By doing so he put Himself in the place of the ancient sacrifices, but He did so in the context of a rite, which he ordered the Apostles to perpetuate as a supreme sign of the true sacrifice, which is Him. With this faith, … day after day we celebrate the Eucharistic Mystery, and adore it as the centre of our lives and the heart of the world”.