Even the Messiah was a Refugee

VATICAN CITY, 16 JAN 2011 (VIS) – At midday today, the World Day of Migrants and Refugees which “invites us to reflect on the experience of many men, women and families who leave their own country in search of better living conditions”, Benedict XVI appeared at the window of his study to pray the Angelus with faithful gathered in St. Peter’s Square. 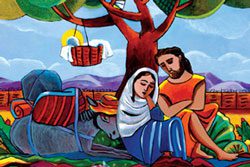 VATICAN CITY, 16 JAN 2011 (VIS) – At midday today, the World Day of Migrants and Refugees which “invites us to reflect on the experience of many men, women and families who leave their own country in search of better living conditions”, Benedict XVI appeared at the window of his study to pray the Angelus with faithful gathered in St. Peter’s Square.

The Pope recalled how, although migration is “at times voluntary, at others it is, unfortunately, imposed by war or persecution and, as we know, it often comes about in dramatic circumstances. It was for this reason that, sixty years ago, the United Nations High Commission for Refugees was founded. On the Feast of the Holy Family, immediately after Christmas, we recalled how even Jesus’ parents had to flee their land and take refuge in Egypt to save the life of their child. The Messiah, the Son of God, was also a refugee”, he said.

The Holy Father noted how “the experience of migration has always existed within the Church. Sometimes, unfortunately, Christians feel obliged to take the anguished decision to leave their land, thus impoverishing the countries in which their ancestors lived. However, the voluntary movement of Christians for various reasons, from one city to another, from one country to another, from one continent to another, is an opportunity to increase the missionary dynamism of the Word of God, and to ensure that the witness of faith circulates more freely in the mystical Body of Christ, traversing peoples and cultures, and reaching new frontiers, new environments”.

Benedict XVI then went on to refer to the theme of this year’s World Day – “one human family” – which, he said, “indicates the aim, the goal of the great journey of humankind down the centuries: that of forming a single family. A family marked, of course, by the differences that enrich it, but without barriers and in which we recognise one another as brothers. … For this reason it is vital that Christians, though scattered throughout the world and, consequently, possessing different cultures and traditions, should form a single entity, as the Lord wishes.

“This”, he added, “is the aim of the Week of Prayer for Christian Unity which will take place from 18 to 25 January. This year it draws inspiration from a passage in the Acts of the Apostles: ‘They devoted themselves to the Apostles’ teaching and fellowship, to the breaking of bread and the prayers’. The Octave for Christian Unity is preceded, tomorrow, by the Day of Jewish-Christian Dialogue, a highly significant pairing which recalls the importance of the shared roots which unite Jews and Christians”.

After praying the Angelus the Pope said: “On 1 May I will have the joy of proclaiming the Venerable Pope John Paul II, my predecessor, as a blessed. The date chosen is very significant because it will, in fact, be the second Sunday of Easter which he himself dedicated to Divine Mercy and on the eve of which his earthly life came to an end. Those who knew him, those who respected and loved him cannot but share in the Church’s joy at this event”.

Finally Benedict XVI gave assurances of his prayers for people in “Australia, Brazil, Philippines and Sri Lanka, who have all recently suffered from devastating floods. May the Lord welcome the souls of the deceased, give strength to the displaced and support the efforts of everyone striving to alleviate the suffering and difficulties”.