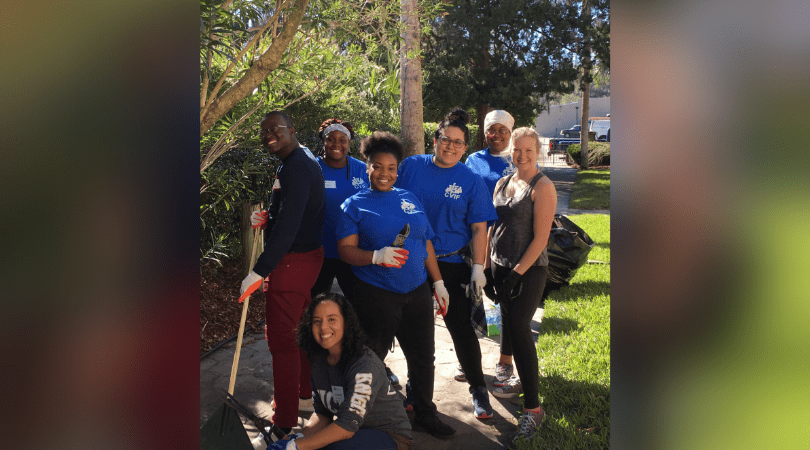 ORLANDO | Since 1983, an estimated 400 volunteers have served with Catholic Volunteers in Florida. Their service transformed their lives and that of those they served. Partnering with more than 40 agencies through the state, these men and women of all faiths continue to answer God’s call to serve “the least of these” (Matt. 25:41).

“One of the greatest gifts of CVIF is the building of relationships,” says executive director Elizabeth Buckley. “The CVIF family crosses the boundaries of race, religion, gender, age, economic background, and life experience, and builds bonds that every day remind me of what I imagine the kingdom of God must look like.”

The organization, first called Augustinian Volunteers, was prompted by a question asked of a South Florida parishioner, Connie Shearer to Father Patrick O’Neill: “How do we involve lay people in service to the communities in need in Florida through the Church?” With a foundation in Catholic Social Teaching, the group began partnering with other agencies to serve. Volunteers age 21 and older are eligible, so long as they have a love and longing to serve God and His people. They receive housing and a modest stipend during their year of service.

Amorandah Ferris graduated from Florida Atlantic University in 2017 and began looking for a job. She was attracted to “being able to work with a non-profit and the opportunity to do direct service,” she said. “I was able to get the experience of working in that field full-time and have the same responsibilities, under the umbrella of CVIF. I am not sure I would have had the same opportunity otherwise.”

She worked in Wimauma, south of Tampa, with a migrant community through Enterprising Latinas, the service site. “It was very eye opening to see there are still very isolated and impoverished communities within Florida,” she noted. “It was great to see the need for community and to see people with a heart for service go into those communities and empower them. It wasn’t just charity, but empowering the women and families there to make their lives better.”

While working in youth development and community event organization, she attended St. Stephen Parish in Riverview, where she became involved with the youth program. The two experiences helped her discern a new direction – work in youth ministry. She signed up for another year with CVIF, currently serving at St. Andrew Catholic School in Orlando as a youth ministry assistant director and teacher’s aide.

“My focus always went towards the youth and my faith has always been very important to me,” emphasized Ferris. “The community of volunteers helped grow that within me as well. Through a lot of prayer and the fact that she found what she was doing “did not feel like work”, she determined this was where she belonged. The journey led her to accepting a job in a parish in St. Petersburg as youth minister this summer.

Edson Jean came to CVIF in August of 2017, first working in the Archdiocese of Miami with South Florida Cares Mentoring and Overtown Children and Youth Coalition. Funds to continue studying psychology were running low and he learned that, through his work at CVIF, he could be eligible for a Segal AmeriCorps Education Award, a grant to help fund his education.

When he interviewed at CVIF “it just felt like a community,” he recalled. It was just what he was looking for. “Even though it is a Catholic organization, they accept everyone that has the same goal—service for the Lord. That was one of the major things that sealed the deal for me.”

Although raised in a Catholic home, Jean says he is still seeking answers about the Lord. “Helping the poor, feeding the hungry, providing shelter for the homeless – the Catholic Social Teachings have been calling me.”

He committed his service in hopes of gaining more experience and training. “CVIF helped me develop my skills in working with people and in my faith journey. They’ve helped me decide where I want to go and to open my heart to Christ,” says Jean. He cites the quarterly retreats at St. Leo Abbey as a key part of that experience. “I did a lot of spiritual, professional and personal development.”

Others began to notice his leadership skills. Startled and reluctant, as he did not see these qualities in himself, he took a hiatus. After much prayer, Jean said he felt God asking him to respond to this gift. “The next time around I was open to service. I wanted to go wherever God called me,” he said. “I just had an open heart and was ready to serve again.” He serves Catholic Volunteers by helping recruitment and facilitating retreats, providing activities on wellness and mindfulness so volunteers avoid burn out during their service year. In August he will begin youth development. “It helped me understand that psychology is the right thing for me and I want to become a youth counselor.”

Lara Orsini volunteers at Bishop Grady Villas (BGV), a residential community for adults with disabilities in St. Cloud. She works with Project SEARCH, accompanying adults who are eligible, with job training and placement. After graduating with a master degree in business administration and a bachelor in psychology and human resources, her work at BGV helped her discover her passion for working with the disabled community. The work has exposed her to the needs of the community and the chance to work with various government and city entities, giving her a perspective of what is required to make this type of program possible. She hopes to become a service provider herself when her time at CVIF concludes.

“Catholic Volunteers really helped me focus and realize what my purpose was. It gave me my connection to religion and to God,” said Orsini. She was raised Catholic and even attended Catholic school, but said, “choosing CVIF was my first step of actually choosing to follow in a Catholic path. This is the first time I am living for God, and not so much for a paycheck.”

In living more simply, on a smaller budget, volunteers are able to focus on service and selflessness. Ferris noted, “Living simply is one of Catholic Volunteers’ values, and I definitely had to find ways to budget… I learned how to make choices about what was really important, which is different than the very materialistic culture we live in for sure.” She concurred with Orsini and Jean that the complete experience made them better people, allowing them to look within and be open to trusting God’s plan for their lives.

“We learn so much from our amazing volunteers, and we accompany them on their faith journey,” added Buckley, CVIF’s executive director. “We see and honor the Christ in one another, and the people in the communities we serve, so we can share God’s love in the world. What a blessing!”

To learn more about Catholic Volunteers in Florida, go to www.cvif.org.