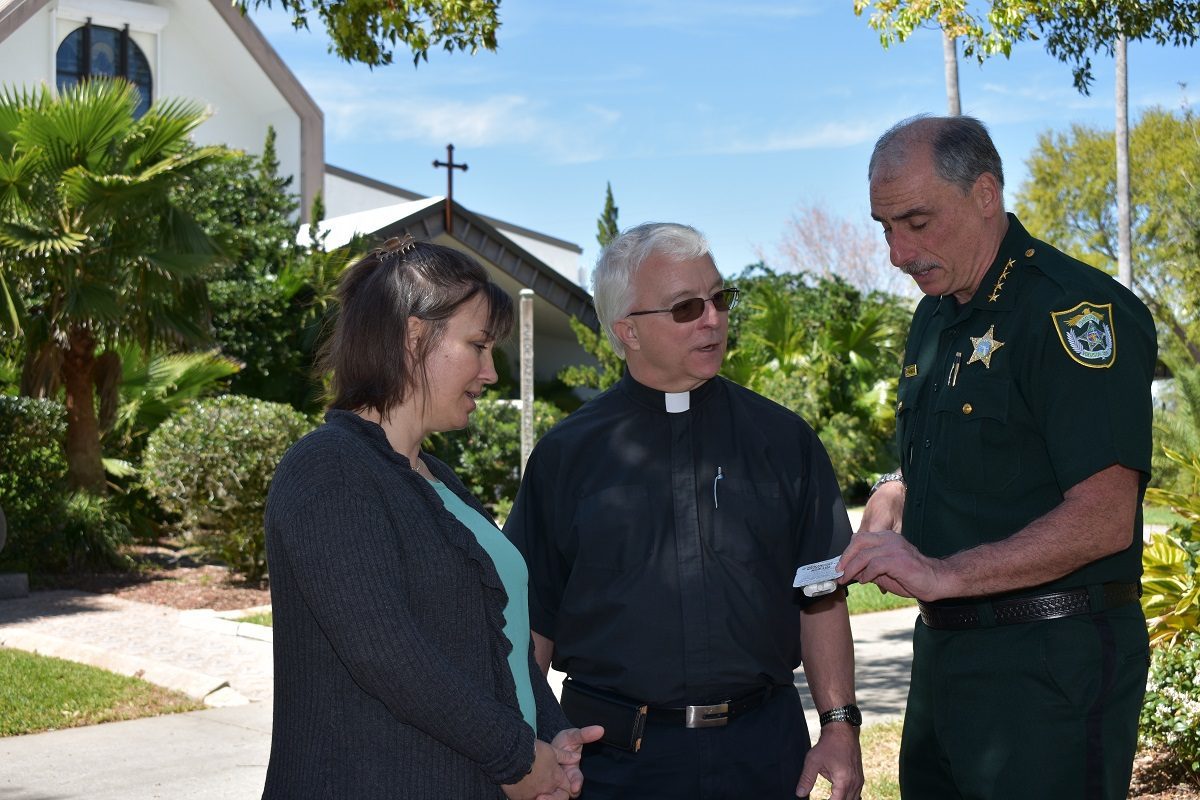 From 2015 to 2016, the rate of opioid-related deaths in Volusia County doubled, making the county rate 75% higher than the state average. That’s when Fighting Against Injustice Towards Harmony or F.A.I.T.H., a social justice organization made up of 32 religious congregations in the county, stepped in.

“We had more than 400 members of our congregations attend 40 home meetings where people discussed what problems they were experiencing in the community and shared their stories. A few members discussed personal experiences of family members dying of heroin overdoses,” said Jessica Robillard, one of the groups’ organizers.

It was March of 2017. One of those members who spoke at a F.A.I.T.H. house meeting was a parishioner of Our Lady of Hope Parish in Port Orange, Janet Otto. She addressed the crowd recounting the joy of her son Frankie’s birth, his early childhood, his knowledge and wit. He received Confirmation at the parish and graduated from Spruce Creek High School in 2007. But his adolescent experimentation with marijuana led to an oxycodone addiction.

“Before long he began shooting heroin because it was readily available and cheaper. His life began to spiral downward,” said Otto. “After he made an effort to put himself in detox rehab and failed, I took the only next steps I could; I Marchman Acted him.” She explained, “To Marchman Act someone means you petition the court to order them into an evaluation. He was ordered into treatment and attended a detox and a rehab.”

There he met another recovering addict, Kaylee, fell in love and had a child, Jillian. But their joy was short-lived. “The stress of parenthood and the responsibility proved too much for them and they began using heroin again by the time Jillian was six weeks old,” she recalled. “Kaylee overdosed in April. Frankie found her blue and unresponsive. Fortunately, they had in their possession a dose of Narcan, which Frankie administered to Kaylee and then called 911.The Narcan saved her life.” Frankie had been able to procure Narcan because it is commonly sold at the drug store. Although the two remained sober for some time, Frankie eventually relapsed. In her testimony, Otto shared her worst memory. “On October 13th, 2016, I received a call from Kaylee, she said it was really an emergency, so I called her back immediately. She said, ‘Frankie’s in the hospital.’ ‘Is he okay?’ I asked. ‘No’ she replied. ‘He’s gone.’ I said, ‘What do you mean he’s gone?’ ‘He’s gone’ is all she could mutter.” Frankie had died of an overdose because first responders did not have Narcan. It was two weeks before his 27th birthday.

Otto’s final plea to those gathered was, “There is so much to be done, who is going to forge the way? Let’s put the life-saving Narcan in the hands of police, sheriffs and first responders to give these people another shot at life. Please don’t let another son die in vain.”

Fatal overdoses involving fentanyl in Volusia County have quadrupled since 2014. F.A.I.T.H. met with community leaders asking for law enforcement entities to start carrying Narcan kits. The kit contains the nasal spray naloxone, or Narcan, which blocks the brain receptors that heroin and other fentanyl related drugs activate, reversing the overdose. Although ambulances and paramedics have carried the kit for years, in June 2017 the Volusia County Sheriff’s Office and Daytona Beach Police Department were equipped thanks to a $12,000 grant from Stewart-Marchman-ACT Behavioral Healthcare, a drug treatment agency for exceptional and comprehensive services to individuals living with addiction, mental illness or both, and the F.A.I.T.H. team. More than 700 doses have been administered countywide since then, including through emergency rescue services. More than 900 law enforcement agencies across the U.S. have begun carrying Narcan.

Volusia County Sheriff and parishioner at Our Lady of Hope, Michael Chitwood said, “Before we go out on the street every morning, our number one overriding goal is the sanctity of human life. This gives us the ability to do that.” He highlighted the severity of the issue explaining, “Seventy to 80% of our crime calls are somehow related to the opioid crisis. And the county is seeing a lot of crimes committed directly related to a family member with an opioid addiction.” He cited crimes such as raided bank accounts and other items stolen to support habits.

“This is an epidemic and people are dying,” he said. “There are times when we are the first ones there. In a situation when seconds or minutes determine life and death, it wouldn’t make sense for us to need to call for rescue… when stopping it is as easy as spraying the nose spray.” Chitwood noted some of his officers have had to administer the spray to themselves simply from exposure to airborne fentanyl when handling evidence. All of his evidence departments and the courthouse are now equipped with kits for this reality. It is his opinion that, “The reason we have Narcan in the hands of law enforcement in Volusia County is because of F.A.I.T.H. Just through the sheriff’s office, we have administered 28 doses since we started.”

Pastor at Our Lady of Hope, Father Chris Hoffmann, is an active member of F.A.I.T.H. and co-chair of the organization. He is passionate about the work they do and argues that all Catholics must abide by Catholic Social Teaching to help the addicted. “We are called to do justice,” he said. “It is part of the Gospel.”

He is excited about F.A.I.T.H.’s next venture—working with law enforcement to prevent juvenile arrests and incarcerations which have a lasting impact on a youth’s chance of success. The group is working to replace these with civil citations and diversion instead. Father Hoffmann firmly acclaims, “We will succeed because God wants us to be successful.” And the F.A.I.T.H. organization echoes his exuberant positive attitude whenever they meet—as the speaker states at each opening, “F.A.I.T.H.” and the entire crowd fervently shouts, “moves mountains!”

FAITH (Fighting Against Injustice Toward Harmony) is funded in part by the U.S. Bishops Office of the Catholic Campaign for Human Development (CCHD).   CCHD promotes the life and dignity of each person and assists families trying to get out of poverty.

By Glenda Meekins of the Florida Catholic – March 6, 2018