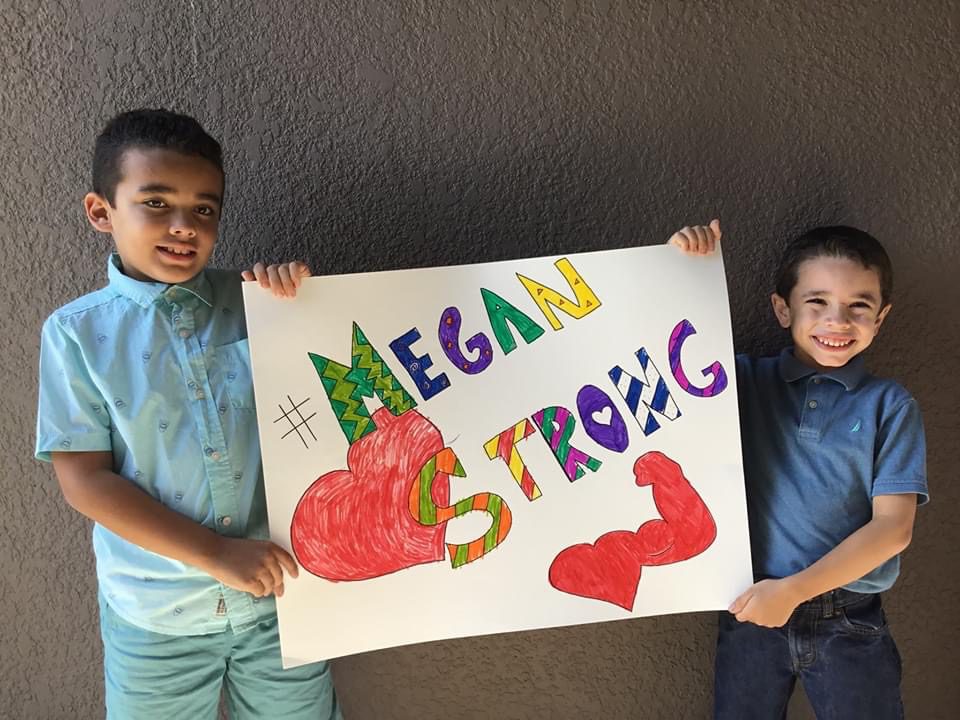 Some last names have been omitted to protect the privacy of minors.

ST. CLOUD | “Today is not a great day for Megan,” Kristie explained. “She’s not feeling well and her counts are low, but I always tell her, ‘Remember, we are given strength by the Lord and also given strength by our friends surrounding us who are praying for us, so we’re going to get through this moment.” Kristie is a former administrative assistant at St. Thomas Aquinas Catholic School in St. Cloud. When her youngest daughter, Megan, was diagnosed with Hodgkin’s Lymphoma in early April, Kristie learned how tight the bonds to her old job still were—bonds strengthened by a faith she has always modeled. The hashtag she created for her daughter, #MeganStrong would soon ignite the support of her St. Thomas Aquinas (STA) family. 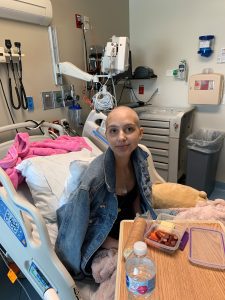 Little more than a week after learning she had cancer, 16-year-old Megan need surgery to determine what type. “Coming out of that surgery, (Megan) was just amazing,” recalled Kristie. “I thought, the strength of this child, coming out of surgery, knowing you are being diagnosed with some type of cancer… She had so much strength and such a will,” she noted, still astonished. “She is a strong-willed girl. I think she gets her resiliency from being a military child and having to move and deal with many different possibilities.” That’s when Kristie came up with the hashtag #MeganStrong and posted it along with a photo. Among her St. Thomas Aquinas friends who saw the post was Stacey Miller, director of technology.

“Having gone through losing a brother to leukemia, I know what it feels like for a family facing this battle,” he said. “It’s a roller coaster of emotions and sometimes you feel alone. When we were going through that, Mrs. Kristie was there for us, encouraging us to stay strong and continue praying for God’s intervention. When I found out about what was going on with Megan, I knew I had to help in some way; to show her we are all here, praying for her.” Kristie’s posts with #MeganStrong inspired him to ask STA families for prayers and support. 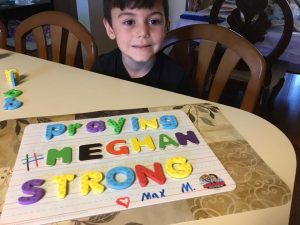 He included Megan and her family in his weekly prayer intention video, encouraging students and families to share their support by posting pictures with the hashtag. Miller said, “It kind of just took off from there. We had dozens of families show their support by sharing inspiring images of hope and faith. I know every Catholic school will say this, but we are a very close community here at STA. When one of our own is in need, we make it a priority to help.”

Kristie was flooded with uplifting messages. “When I see they have tagged me, it puts a smile on my face. My daughter, Nicole, and my husband, Brian, smile as well knowing we’ve made that connection,” said Kristie. “It’s inspiring to see #MeganStrong – we have you in prayer. You can beat this! You’re in our thoughts and prayers. The kids at St. Thomas are overwhelming. I still know some of those kids because they were there when I was there.” She added, “I do believe with everybody supporting us in prayer—it has helped us and guided us. For all of us—it’s still having faith that God brought me to this point. He’ll see me through.” 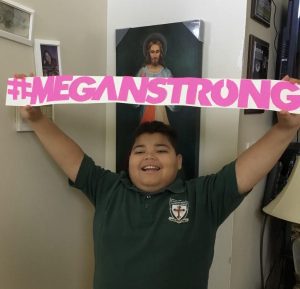 Megan says the messages make a difference. “I feel so loved and cared for by so many that I hope there are others experiencing that same support. My mom always reminds me of this verse, ‘For where two or three are gathered together in my name, there am I in the midst of them.’”(Mt 18:20)

“(Megan’s) faith, and our faith as a family sees us through this,” says Kristie. It is the strong devotion, honored by her parents, from which Megan derives her own. Although the Air Force family moved often, Kristie always managed to work in the Church, at base chapels or offices. That continuity spurred a lived faith. When her husband retired and the family moved to Florida, Kristie sought employment with the Church once again, landing at St. Thomas Aquinas. School staff and new friends there supported her until Brian was able to join Kristie and the girls. When he accepted a job in Utah, a year and a half later, STA was there once again and never really let go.

Front office co-worker, Marjorie Smith, said Kristie made it easy. The two quickly became friends and remained in touch after Kristie’s family moved in 2017. “Kristie is definitely a person who is full of grace, wisdom and understanding and one of the strongest people I know,” said Smith. “Kristie is the type of person who wants to build up those around her to become better versions of themselves. She is always a pillar of strength for others, especially in time of need. She is a person who people speak of because of the positive light she brings with her … she will always make an impact on the lives of people she encounters.” 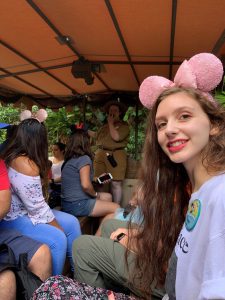 Megan is the proverbial apple that did not fall far from the tree. “She is probably one of the most kind-hearted souls you would ever meet,” said her mother proudly. “She will put somebody else’s needs before her own … Any way she can build somebody up, she will.” Kristie noted Megan’s diagnosis was difficult, not just because of the illness itself, or that it occurred in the middle of a pandemic, but because Megan is not used to thinking of herself. “It’s been a whirlwind for her. …At the end of the day, she’s still most worried if she’s going to burden us…  Even when we’re faced with cancer, she’s still willing to smile and spread that joy and make somebody else’s day a little bit better.”

Kristie remembered the day Megan’s hair began to fall out. “She was devastated,” noted Kristie, who completely understood. The next morning Megan woke up and said, “We’re shaving this off.” “For a lot of girls that would have probably been the most dreadful situation in her life. But she took it and she owned it,” noted Kristie. “She actually got dressed up in a black pantsuit and high heels and was just strutting her stuff. She said, ‘Now look at me.’ I didn’t know what to say. Once again she had more strength than I think I could ever bare. I think she’s a positive role model for a lot of kids.”

Megan gives God the credit. “I have the courage to face each day by knowing that through my trials and tribulations, God is walking beside me,” Megan said confidently. It is the same belief that bolsters her to explain her faith to her many friends in the Latter Days Saints community in which she lives in Salt Lake City. She is unabashedly Catholic and eagerly points others to her source of strength, even on a bad day.

For others who are suffering, whether with cancer, or during this pandemic for numerous reasons, Megan encourages them. “Stay hopeful and trust in your faith. Take time to speak to God and ask for guidance, knowing He will never abandoned you. Each day you wake up, start it new and ready to conquer the world—even if you fall a few times, dust yourself off and keep going.”

By Glenda Meekins of the Florida Catholic, June 3, 2020