FAITH celebrates results and forges ahead 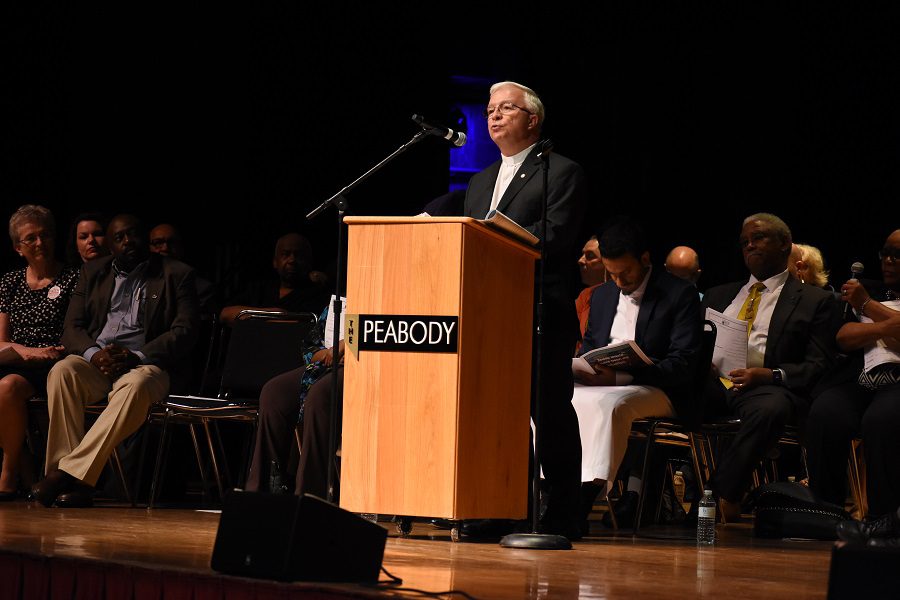 Father Chris Hoffmann, pastor of Our Lady of Hope Parish in Port Orange and co-chair of FAITH addresses members during its annual Nehemiah Action, which recognizes progress made toward enacting social justice in the community and presents the issues for the upcoming year. (GLENDA MEEKINS)

FAITH has been tackling social issues using Christian teaching as its foundation for nearly two decades. Father Chris Hoffmann of Our Lady of Hope Parish in Port Orange and co-chair of FAITH acknowledged the tireless work of its many representatives. People from various religions research challenging matters like youth arrests and school discipline, then approach local decision makers to push reform.

After four years of struggles, FAITH finally convinced the Volusia County Sheriff’s Office and the Daytona Beach Police Department to change policy and make civil citations the default punishment for children who commit first, second and third time misdemeanors. FAITH is now addressing the 300 cases where civil citations were eligible, but not chosen.

Policies on the issue vary from city to city, so FAITH asked State Attorney R.J. Larizza to draft a Memorandum of Understanding universalizing the criteria for eligibility, saving hundreds of children from being arrested. Larizza has already begun working on the memorandum, which will include all but offenses committed with a firearm, sexual offenses and some domestic battery offenses. “Changes to this policy will make it one of the strongest in the state,” said Father Hoffmann.

Larizza, who was present at the meeting, said, “I want to thank and applaud you for your commitment to your communities. I want you to know that, we, in the criminal justice system have the same commitment.” He went on to say that the department has already facilitated the processing of restitution payments from those apprehended through the Florida Department of Juvenile Justice.

Civil citations spare youth who commit minor offenses from carrying the lifelong burden that comes with an arrest record. Instead, it offers options such as restitution, community service, counseling and education. Civil citations also save taxpayers an estimated $4,100 per arrest.

The meeting also focused on restorative versus punitive justice as an alternative disciplinary action in public schools. One grandparent shared the story of his granddaughter who was suspended 20 times in middle school. Rather than trying to help address her troubles, he feels the suspensions only caused his granddaughter’s situation to escalate.

FAITH research showed Florida students who are suspended are 10 times more likely to drop out of school. The statistics also indicated suspensions are associated with negative student outcomes and lower academic performance. Rachel Hazel, Curriculum Director of Volusia County Schools, and Linda Cuthbert, Chair of Volusia County School Board, both agreed to put full effort into expanding the restorative action programs in place for all Volusia County middle and high schools by 2023 in order to reduce high out-of-school suspension rates.

As the meeting concluded, FAITH accomplishments only energized the crowd to continue their work. In his closing prayer, Chadwicke Cannon Sr., of Daytona Deliverance Church of God in Daytona Beach, affirmed them saying, “We are called to listen to the commands to love and do justice. Our gathering this day reminds us of our responsibility to work with one another to remake our world into a more hopeful place of peace.”

For more information on how to get involved, ask your parish priest or contact faithvolusia.org.