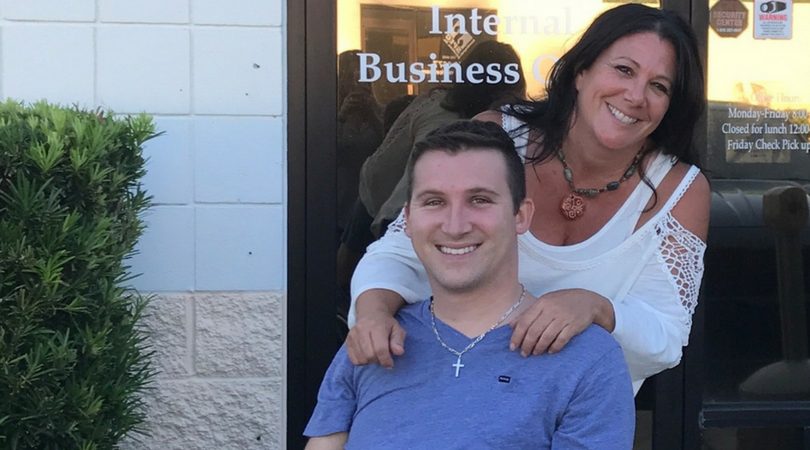 Kirk Crandall’s journey of faith began with his mother, Shawn Reynolds. She planted seeds that took root. Through the witness of a Catholic family and youth group friends, he eventually became Catholic. It was that conversion of heart and the support of his community that gave him strength after his truck rolled into a ravine in August of 2012, leaving him paralyzed from the chest down. Thanks to his faith, community support and rigorous physical therapy, Crandall is beating the odds.

Crandall began attending the youth group at Our Lady of Lourdes Parish in Daytona Beach with his best friend Eric Ruffino, in the 9th grade at Spruce Creek High School in Daytona Beach. “I was at Eric’s house a lot and began to go to church with them,” said Crandall. “Then his dad, Jerry, talked to me about going through the classes and getting baptized and he would sponsor me. So every Saturday Jerry would take me to class (Rite of Catholic Initiation of Adults). He’s a great person who’s always taken me under his wing and that’s how it all started.”

Jerry’s wife, Trish Ruffino said, “It (becoming Catholic) was one of the steps he chose to make. Part of it was that most of his friends were Catholic and he was so moved and inspired by the youth ministry. It was all the right things put together.”

Crandall loved attending Mass and remembers the effect this process had on him. “I’ve always wanted to be a good person, but it struck me that it is more so about truly devoting yourself and giving your life to God. Realizing that He controls your path,” explained Crandall. “I felt like it really brought me closer and opened up my true self. I had never given myself to Jesus before that. I thought that I could control things and that God put me on this earth, but my life was my life. After that, I realized that everything has a purpose and my life has a meaning and God is watching over me in everything that happens.”

He credits that turning point in his faith journey with helping his recovery. His mother recalls leaving the hospital with him two weeks after the accident with his sister Gabby, who had withdrawn from college courses to help her brother. “Trying to lift him into the car, we almost dropped him several times,” said Reynolds. “And so our journey began… we were all so afraid. We laughed until we were all in tears.”

Through a series of what both Reynolds and Crandall believe to be miracles, and Reynolds’ sheer tenacity, she was eventually able to get Crandall into Magee Rehabilitation in Philadelphia, Penn., a spinal cord injury center. Kirk was the first with this level injury to be admitted to the program and his incredible advancement led others with similar injuries to gain admittance. “I see God working for us constantly. And it’s not that God just works for Kirk and me. That was huge for tons of people,” said Reynolds who became Catholic in 2014 while Crandall was doing more rehab in Michigan. “I’d always found my comfort in my prayers and in the Catholic Church, so it was time” she said.

Her journey of conversion led her to develop a deeper relationship with God based on trust—a trust that was tested when Crandall transferred to Barwis Methods Training Center in Port St. Lucie, Fla. four years ago at a cost of $53,000 per year. The generosity of friends and fundraisers has covered the cost. “I have learned that if it’s meant to be, then God will give you the people and the path,” Reynolds said. The rehabilitation has led to Crandall’s unprecedented diagnosis reversal— the possibility of walking.

The Ruffinos still keep in touch. Trish Ruffino assists with fundraising and speaks to Reynolds almost weekly. Her son, Eric, continues to support Crandall through their lasting friendship and each year, his Daytona Beach community steps up to participate in an annual golf tournament that helps cover the cost of Crandall’s therapy.

Trish believes, “God was preparing him all the time for this. When he was in the car accident and became paralyzed, his faith was what sustained him. It’s really strengthened him and allowed him to make the progress he’s made.”

Crandall conceded, “I felt that through Jesus, I was going to beat this. It’s what I expected. I believe it is a miracle, because of God and how hard we’ve worked and our faith in God.” He also credits the many who have helped him on his journey.

Now, at age 27, he is in college and a parishioner at St. Bernadette Parish in Port St. Lucie. Crandall even drives a pick-up, and chronicles his road to independence on his own YouTube channel. And his faith still carries him. “It helps me to talk to God, to talk to Jesus and know that He’s with me struggling. He knows that I’m struggling and it’s going to get better,” says Crandall. “My faith helps me every day because every day it’s still hard. But I still know that I’m going to have a great life. Without faith, I don’t think I could make it. Faith and hope is everything right now.”

By Glenda Meekins of the Florida Catholic – February 14, 2018