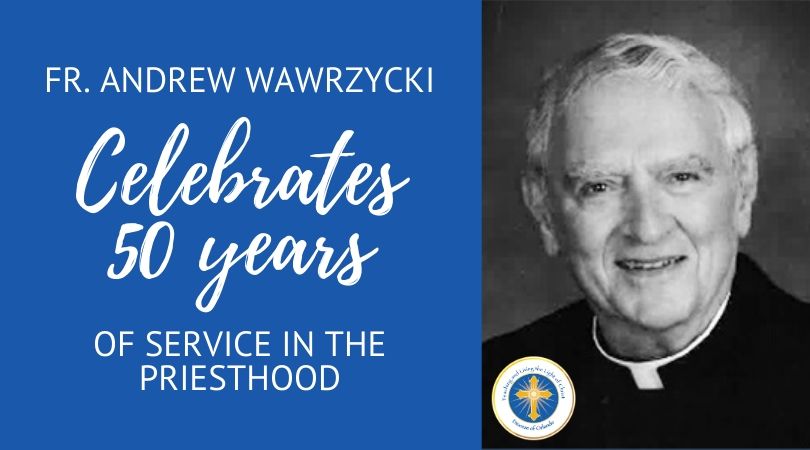 Celebrating his 50th year in the Church, Father Andrew “Andy” Wawrzycki continues to move forward as an honorable man serving as a priest. A beloved pastor in Florida for many years, it was during the last two decades that he helped in the creation of three churches.

“It had taken a toll on me,” he said about his tough decision to move to Washington state, where he lives now, sharing a house with his sister. “She took me in,” he chuckled. “I am a free boarder.”

And although retired, Father Wawrzycki still stays busy. “I’ve been helping out in the parishes, but I’ve been doing a lot of reading and also a lot of communicating with the people back in the parishes. They don’t want to give up.”

His ambition and desire to help his fellow Christians was a trait he learned from his years studying for priesthood while attending St. Thomas Seminary in Hartford , Connecticut, and Mount St. Mary’s Seminary in Cincinnati, Ohio. In an interview with the Florida Catholic, he recalled the moment when he received his call to begin towards being a priest. It was New Year’s Eve (during senior year in high school) and my parents were playing pinochle … and I was watching television,” he said. “There was this old movie on called ‘Keys to the Kingdom’ and that made me think hard. And that really was the start of it all.”

Father Wawrzycki reason for becoming a priest was simple: “I wanted to save my soul and this led to saving other people’s souls.” This motivation has yet to face any stopping. Father Wawrzycki credits the Church’s purity for his constant involvement these days. “What excites me about the priesthood is good Sunday Masses and good singing and very good music, music that people want to sing and know.”

The motivation that still burns in his heart stems from seeing Catholics overcome obstacles from using the help from the Church. “What excites me about the priesthood is good Sunday Masses and good singing and very good music that people want to sing and know.”

He spends his free time enjoying music. “I do love music,” he said. “I have a nice system here.”

When it comes to his favorite saint, his said quickly, “St. Paul. He went through so much physically, spiritually. He suffered a lot, and came up on top.”

Although Father Wawrzycki loves and respects each Catholic prayer, it is the Beatitudes, the collection of prayers as said by Jesus during the Sermon on the Mount in the Gospels of Matthew that truly resonate with him.

For his upcoming 78th birthday, Father Wawrzycki plans to spend it with family and friends.