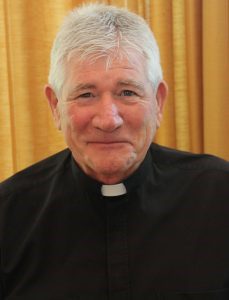 Missionary Oblate of Mary Immaculate Father Charles Deeney was born October 26, 1945 in Letterkenny, County Donegal Ireland, one of 10 children to James and Bernadette Deeney. He was educated in schools in Letterkenny and Dublin and studied at Milltown Institute of Philosophy and Theology and the Oblate Theologate in Piltown, County Kilkenny. At the age of 26, he was ordained into the Oblates of Mary Immaculate in Kilkenny, Ireland. The Oblates of Mary Immaculate’s primary purpose is to bring the good news to the poor and most abandoned. This mission took Father Deeney to Brazil as one of his earliest assignments. He would serve as a pastor there for 16 years and would learn to speak Portuguese fluently. He returned to Ireland for several years before continuing his mission in the Diocese of Orlando, where he has served the communities of Annunciation Parish in Altamonte Springs, St. Ann Parish in Haines City, and St. Francis of Assisi Parish in Apopka. He is currently the pastor of St. Patrick Parish in Mount Dora where he has been serving since 2017. His ability to speak Portuguese has allowed Father Deeney to minister to the local Portuguese-speaking Catholic community. In 2001, he represented the Portuguese-American community on an advisory board to the diocesan Ethnic Ministries Department and he celebrated Mass in Portuguese once a month during his time at Annunciation. He will celebrate his 50th anniversary to the priesthood on Dec. 18, 2021.