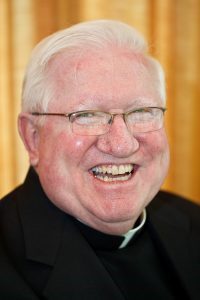 Father Ed McCarthy describes his parents, Peg and Redmond McCarthy, as “faithful cheerful Catholics” and it would seem that their love of the faith was passed down to their children. Of their seven living children (they had one son who died in infancy), they would produce two vocations – a religious sister and a diocesan priest. Father McCarthy knew from an early age he was called to the priesthood. So certain was he that when it came time for high school, he enrolled in Quigley Preparatory Seminary in Chicago; even though it meant waking up at 6:00 a.m. to attend morning Mass and then taking a train, a bus, a subway, and then walking four blocks before arriving at school. In four years, he was never late.
“When you know what you want at an early age, everything is pretty clear,” remembered Father McCarthy. “It wasn’t that challenging. I was just a happy kid doing what God wanted me to do.”
From Quigley he would go on to the University of St. Mary of the Lake/Mundelein Seminary and after a period of discernment he applied to Bishop William Borders to come to the Diocese of Orlando. Not only did Bishop Borders agree, he ordained Father McCarthy at his home parish in Bensonville, Illinois, Sept. 18, 1971 and allowed him to complete his master’s degree in psychology before beginning his first assignment. Over the years, Father McCarthy would continue to earn advanced degrees, including a master’s of education in guidance and counseling, licentiate in sacred theology and a doctorate in ministry.
“As part of my doctorate, I developed a peer ministry program that is still going on in places,” said Father McCarthy. “Some of my most cherished moments are seeing those men who were in the original program, now in their early 50s, who are outstanding members of their parish. They are participating, intelligent, wonderful Catholics. To see that and know I had a small part in that is a most treasured memory.”
His work with youth would continue as the diocesan director of youth ministry and then as vocations director. He also served the parish communities of St. Charles Borromeo in Orlando, St. Patrick in Mount Dora, Divine Mercy in Indialantic, Our Lady of the Lakes in Deltona, St. Paul in Leesburg and the Basilica of the National Shrine of Mary, Queen of the Universe. Though technically retired since 2011, Father McCarthy continues to serve as the vicar for senior priests and assists at All Souls Parish in Sanford. Still, he manages to find time for a favorite hobby – gardening.
“I have fruit trees, a vegetable garden and a flower garden. I have nature all around me,” said Father McCarthy, who says that his love of nature is part of his Celtic heritage. “You can find God anywhere, but especially in relationships and nature!”
Father McCarthy’s long-time prayer has been to live to see his 50th anniversary to the priesthood. Now that it is here, he looks back with gratitude at a wonderful life.
“I have been very blessed,” said Father McCarthy. “God has been unbelievably tolerant and merciful to me.”