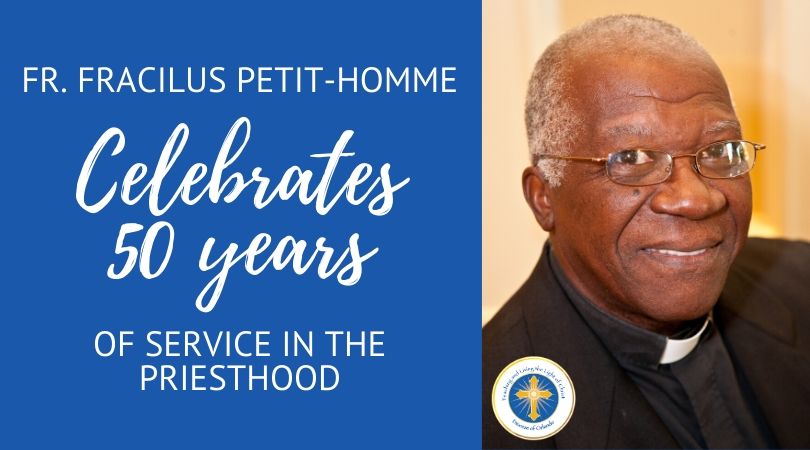 The Haitian community throughout Florida has a compassionate and spiritually grounded leader in Montfort Father Fracilus Petit-Homme.

Born and raised in mountainous area of Bassin Bleu, in the providence of Jacmel in Haiti, he has served in the United States since 2003. Before that time, he served in Haiti, France and Canada as a Montford Father, which is the congregation of Missionaries of the Company of Mary, also known as the Montfort Fathers and the Society of Mary of Montfort.

While in Haiti, he at one time served as rector of the Cathedral of the Immaculate Conception in Port-de-Paix. At that time, he helped foster the Sister Diocese relationship with Amor en Acción, a ministry of the Miami Archdiocese.

Having relatives in Florida, Father Petit-Homme served many Haitian apostolates across the Sunshine State. In the early 2000s, he served within the St. Petersburg Diocese, celebrating Mass in Ybor City, St. Petersburg and Tampa. This led to the establishment of a new “quasi-parish” of the Immaculate Conception Haitian Catholic Mission Our Lady of Perpetual Help in Ybor City 2004, which he was asked to lead.

Within the Orlando Diocese, he has served the faithful around Polk and Osceola counties, in parishes such as St. Joseph in Winter Haven, St. Catherine of Sienna in Kissimmee, St. Rose of Lima in Poinciana and St. Ann in Haines City. His reach for the Haitian community has gone even further to include Orlando. Currently, he resides at St. Joseph Parish in Winter Haven and serves the surrounding Haitian population.