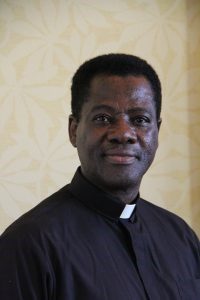 Growing up in Awaso, Ghana, Father Francis Amponsah watched missionary priests come into his town each week for Sunday services. As a five-year-old, he was particularly impressed by the Volkswagen car they drove and the fact that his mother always cooked them chicken and rice – a rare and favorite treat of Father Amponsah and his three siblings. He said, with a laugh, it was the beginning of his vocation. “It got me to thinking, if this is the lifestyle of a priest, then I will also be a priest,” he explained.

That childhood desire was reawakened as a teenager. Since the missionary priests who served his town spoke English, a local catechist would interpret the homily for the congregation. One day Father Amponsah, who was learning English in school, realized that the translation was not correct.

“The people were not getting the right words from the priest’s mouth,” Father Amponsah remembered. “I thought, ‘I will become a priest so that the people can understand better, in their own language.’”

Father Amponsah would continue to discern and pray until finally entering the Minor Seminary-St. Hubert-Kumasi at the end of middle school. He then attended St. Paul’s Seminary in Accra (Ghana’s capital) and received a diploma in Philosophy. Immediately following St. Paul’s, he was accepted to and began formation at the St. Peter’s Regional Seminary, in Cape Coast in 1992. He was ordained a priest four years later on July 20, 1996. And while Father Amponsah has not yet owned a Volkswagen, he says his Ordination gave him a far greater blessing.

For 20 years, Father Amponsah was able to fulfill his other dream of priesthood – ministering to his people in their native language. He served at three parishes and as a hospital chaplain in the Diocese of Wiawso, Ghana before arriving in the Diocese of Orlando in 2017. Here he has served the communities of Holy Name of Jesus Parish in Indialantic and St. Anthony Parish in Lakeland.

“It has been quite a joy for me to serve the people of God. There have been some difficulties, but in the midst of it all God has delivered me and kept me safe,” said Father Amponsah. “I’m celebrating 25 years of priesthood. It’s a good achievement, I think! God has been so good and gracious to me. I am very happy.”