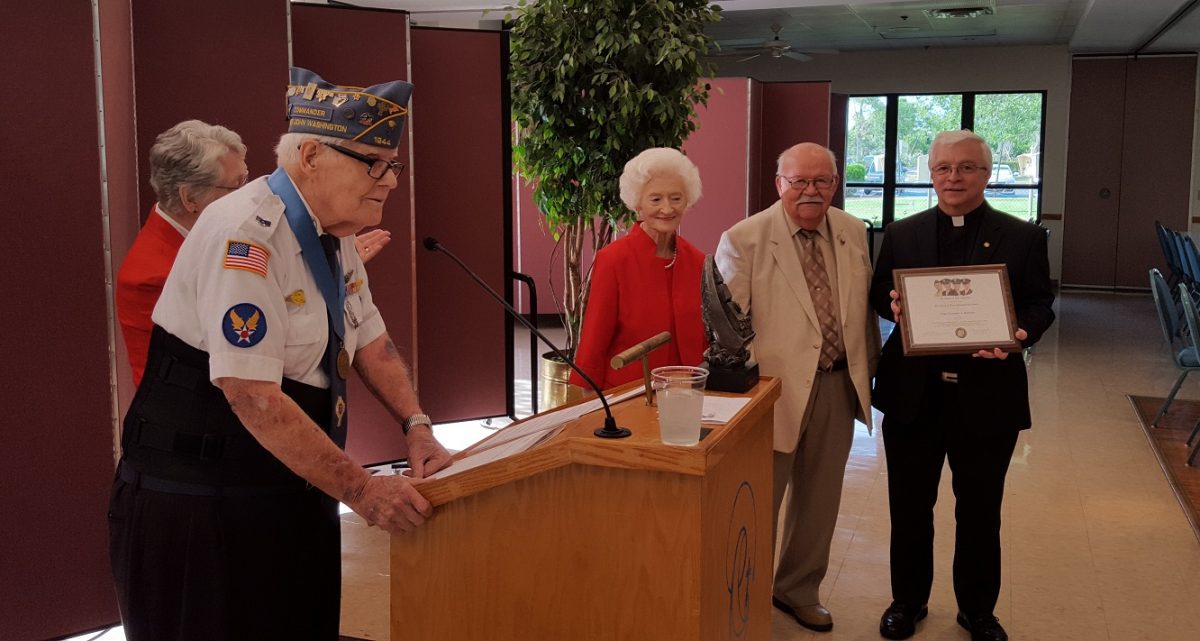 Father Chris Hoffman, pastor of Our Lady of Hope in Port Orange, receive presitgious Legion of Honor Humanitarian award from the Four Chaplains Memorial Foundation. The award was presented to him by his parents. Gene Swarbrick, left, nominated Father Hoffman for the award which recognizes men and women who have significantly contriubted to the world by their actions COURTESY

ORLANDO | When a torpedo hit the USAT Dorchester, an army transport ship carrying 900 people in 1943, most of those onboard panicked. But four army chaplains from varying faiths kept calm. Amidst the chaos, Father John Washington, a Catholic priest; the Reverend Clark Poling, of the Reformed Church in America; Rabbi Alexander Goode; and Methodist Reverend George Fox stood arm and arm in prayer as the ship went down, only after offering their life jackets to soldiers who had none and assisting more than 200 men off the ship.

The Four Chaplains Memorial Foundation, established by President Harry Truman in 1951, honors their courage and faith through their Legion of Honor Award programs. This year, Father Chris Hoffmann, pastor of Our Lady of Hope Parish in Port Orange, a former Air Force chaplain (24 years as a reservist), received the Legion of Honor Humanitarian Award.

According to the foundation, “The Legion of Honor Humanitarian Award is given in recognition of a lifetime commitment to selfless service and societal advancement that has demonstrably affected the quality of life in the community, state or nation, service without regard to faith or race. The selection process for this award is rigorous.”

Gene Swarbrick, regional director for the organization, a bronze medallion recipient and former Army Air Coreman, said he nominated Father Hoffmann because “I met Father Chris and he became chaplain for the Father John Washington Post 1944 of the Catholic War Veterans’ Association. He is a phenomenal man.” Swarbrick, who served as an altar server at the age of 10 for Father Washington in Orange, NJ, established Post 1944 and as a previous Legion of Honor recipient, is allowed to nominate others who might be eligible for the award.

Some of the many circumstances and events that qualified Father Hoffmann for the award were his work during the first Gulf War, where he consoled people when a plane went down in the Arabian Gulf in 1991. When a bomber drove into the Khobar Towers compound in Saudi Arabia where American military were staying, several of the men killed were from Eglin and Patrick Air Force bases. When the remains were returned to U.S. soil, he was there helping those families deal with that loss.

“In 2008, I was deployed oversees to work with the blood bank helping with the military men and women who were wounded as well as celebrated Mass for people around the world in Riyadh, Saudi Arabia for those who wanted to celebrate their faith,” said Father Hoffmann. “I could celebrate Mass at the embassy and word would get around that a priest was available and they would come.”

Today, Father Hoffmann continues to serve his community as a champion for local social justice causes and as a member of FAITH (Fighting Against Injustice Toward Harmony), an organization of various churches, Catholic, Protestant and Islam, that work together to address the root causes of injustice.

When he heard that he was awarded this honor, Father Hoffmann said, “I was honored, humbled, surprised and a little embarrassed even, when I heard about the people that have gotten this award—presidents, actors and poets. I didn’t know the award was that prestigious even though Gene kept trying to tell me it is.”

Distinguished recipients of the Legion of Honor Awards have included Presidents Harry Truman, Dwight Eisenhower, James Carter, and Ronald Reagan. Others who received the award were Bob Hope, John Glenn, Marian Anderson, Tommy Lasorda and Shirley Chisholm as well as deserving military personnel, veterans, and civilians from all walks of life.

“I do what I do because it seems like the right thing to do and it is what I think God wants me to do, both as a priest, as a human being and as a chaplain,” said Father Hoffmann. The award was presented to him by his parents whom he credits with his commitment to “do the right thing.”