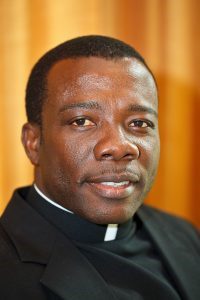 Growing up in the small gold-mining town of Prestea, Ghana, home and church were the center of Father John Maison’s life. They were the places where he felt the most love and joy. In a loving and caring home, he was educated with his siblings, always working together as a team and looking out for one another. At church each week he would worship with a huge extended family of grandparents, aunts, uncles, and cousins. For years he would watch the altar servers, longing to serve alongside them.

“When I was finally old enough to serve, I was enchanted with the mystery and holiness of being on the altar and I was filled with joy, slightly tinged with fear, when I was so near the sacred vessels, vestments, and the Holy Eucharist,” said Father Maison. “My love and reverence for God and my Church grew as I served.”

Soon, he began to be asked if he ever considered becoming a priest, even by non-Catholics! This was an affirmation of the desire already in his heart, to choose the vocation to the priesthood. Father Maison attributes his mother and pastor as being the greatest influences of his vocation.

“The two spiritual giants in my life were my mother who gave me the joy of her faith and her love for singing in church,” said Father Maison. “The other person was the pastor of my church in Prestea. He was available, approachable, active, prayerful, and encouraging.”

After his Ordination on July 20, 1996, Father Maison spent six years in Secondi-Takoradi Diocese, Ghana. In 2002, he began a six-year mission to the Diocese of Montego Bay, Jamaica. Following the mission, he visited friends in Florida who attend Ascension Parish in Melbourne. It was there he began to have an idea where his next mission might be.

Since 2008, Father Maison has served at Epiphany Parish in Port Orange. He strives to live a balanced life of prayer, spiritual reading, study, work, exercise, good friendship, fun and socialization as well as making time for retreats and solitude. He says it is maintaining this balance that helps him to be an effective minister. He was recently assigned to be pastor of Ascension Catholic Church in Melbourne.

“As a priest, one of the greatest gifts I have experienced is celebrating the Holy Eucharist. It is at His table that I have come to know Him, to love Him, to serve Him and to serve others in His name,” said Father Maison. “I am grateful for the opportunity to teach the young, inspire engaged couples, minister to the sick, comfort the dying, care for the elderly, champion the poor, and mentor vocations. I always pray to be a priest that people can turn to in their time of need.”