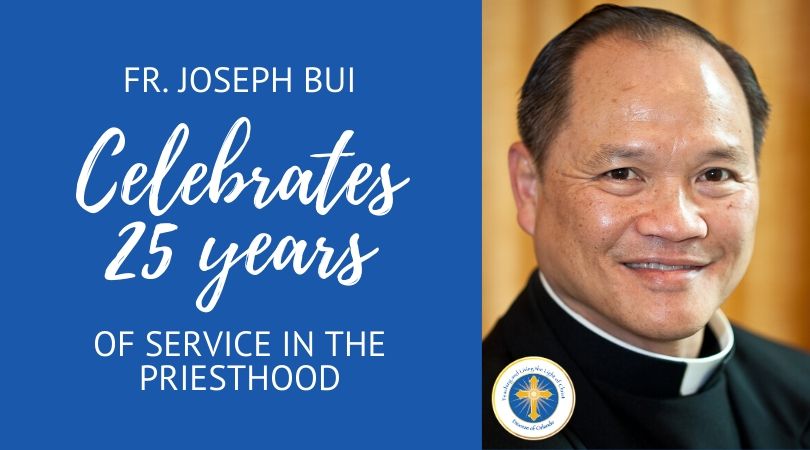 A native of Vietnam, Father Joseph Bui was ordained in Orlando by Bishop Norbert M. Dorsey in a class that including other fellow silver jubilarians May 27, 1995. Born in Vietnam one of 10 children, he attended high school seminary when he was 12 years old, and graduated in 1975.

He knew he wanted to serve God as a priest, but in 1975, the Vietnamese Communists from the North invaded south Viet-nam, and Catholics were sup-pressed in their belief. He stayed in the seminary praying and studying the-ology until 1978, when the Communists closed his seminary in Saigon. In 1983, he completed his studies of theology, but was not allowed to be ordained because the Communists blocked ordinations of priests.

Despite the challenges, he remained true to his dream of becoming a priest and stayed at a local monastery until 1989. That is when, at the age of 32, he made the difficult, life-changing decision to flee his homeland. Along with 91 others, he secretly sailed away from Vietnam in a tiny boat with little food and water. His journey involved time spent in a refugee camp in Singapore and an orientation camp in the Philippines.

He arrived in the United States in 1990. An aunt lived in Winter Haven, and he eventually made his way here. In 1991, the Diocese of Orlando accepted him to the St. Vincent de Paul Regional Seminary in Boynton Beach. Throughout his life, he was convinced that “Per Ipsum, cum Ipso, et in Ipso” (Through Him, with Him, and in Him) all his trials and challenges on his journey would lead to the priesthood. Since his ordination, he has served Divine Mercy Parish in Merritt Island, St. Charles Borromeo Parish in Orlando, Holy Name of Jesus Parish in Indialantic, Immaculate Heart of Mary in Candler and St. Matthew Parish in Winter Haven. He currently serves as parochial vicar of Our Saviour Parish in Cocoa Beach, where he also is head of the Vietnamese community in Brevard County.