As Father Leo Hodges walked through classrooms and hallways of St. Margaret Mary Catholic School on Feb. 7, he noticed many changes since the last time he entered the school – more than 40 years ago. 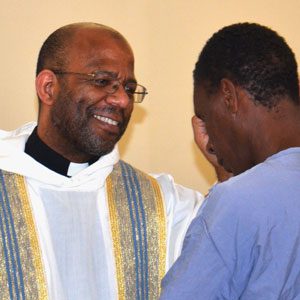 As Father Leo Hodges walked through classrooms and hallways of St. Margaret Mary Catholic School on Feb. 7, he noticed many changes since the last time he entered the school – more than 40 years ago.

“There is so much more technology now and there is a movement toward more collaborative education,” said Father Hodges, who graduated from St. Margaret Mary in 1973.

The recognition, presented annually, honors a graduate who displays leadership within their community. The award wasn’t a surprise to many people who know Father Hodges well.

“(Father) Leo is everybody’s friend,” said Maureen Bowman, among several of Father Hodges’ classmates who attended the recognition ceremony and participated in the celebration of the Mass. “He has a beautiful heart. The light of God just shines through him.”

It was with classmates, like Bowman, that Father Hodges first felt a calling to priesthood. As a student at Winter Park High School, he was active in youth ministry, “which provided me a good foundation to begin to explore vocational options,” he said.

“He just showed so much leadership during youth ministry,” Bowman said. “It wasn’t just about attending retreats or hanging out with friends. He would lead prayer and discussions. You have leaders and you have followers, and (Father) Leo was definitely one of the leaders.”

Walsh met Father Hodges when the two were teenagers and participants in high school peer ministry. Walsh, who then was a parishioner at St. Andrew, remembers that Father Hodges “had a strong faith that meant a lot to him. It’s not a surprise to me that he answered the call to this vocation,” she said.

But that call wasn’t answered immediately. After high school, Father Hodges attended and later graduated from Florida State University, with a bachelor’s degree in criminology in 1981. The year before, he entered a prison for the first time.

“I felt like I was standing on holy ground as I walked into the chapel at Union Correctional (Institution) in Raiford, and sat down and prayed with incarcerated men,” Father Hodges said.

After graduating from Florida State, Father Hodges entered St. Meinrad Seminary in Indiana, and was ordained a priest for the Diocese of Orlando in 1986, by Bishop Thomas Grady.

The ministry to the incarcerated has always been a ministry Father Hodges has embraced. He first learned about the ministry from his parents, who were among many central Florida Catholics instrumental in creating Kairos Prison Ministry International. Kairos, which is Greek for “God’s special time,” is a network of volunteers who engage with and mentor prisoners. More than 36,000 volunteers in 32 states and nine countries provide support to prisoners each year.

For much of his priesthood, Father Hodges has been the chaplain to the incarcerated for the Diocese of Orlando. He serves them by celebrating Mass, administering sacraments and offering spiritual guidance. 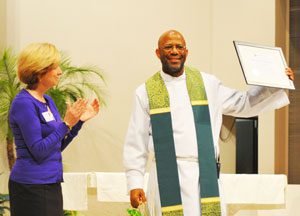 “There is a gospel expectation for Catholics to have solidarity with those who have been marginalized, and certainly the millions of people in prisons in our country would be considered on the margins,” Father Hodges added. “Working with the incarcerated is so important, and very much needed since most people who are in prison do get released.”

Father Hodges acknowledged that establishing and maintaining relationships with all people – whether they are classmates, incarcerated, peers or students – is important in discovering who God is.

“The relationships I was able to cultivate at St. Margaret Mary remind me of the sacramental principle –that God comes to us through us, so our relationships with others are foundational in knowing and being in relationship with Christ,” Father Hodges said.

It’s just one more thing he has taken away from St. Margaret Mary Catholic School. And a philosophy that will never change.