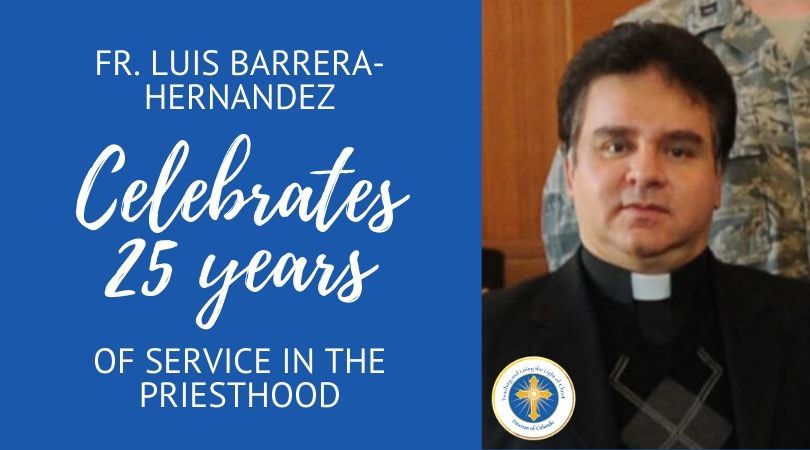 Father Luis Barrera, a native of Colombia, celebrates his Ordination to the Priesthood May 27.

Within the Diocese of Orlando, he has served at St. James Cathedral in Orlando, Blessed Trinity and La Guadalupana Mission, both in Ocala, Holy Spirit in Lake Wales, All Souls  in Sanford, St. Patrick in Mount Dora, St. Paul in Daytona, St. Augustine in Casselberry, and occasionally St. Isaac Jogues and Holy Cross parishes, both in Orlando.

Since 2010, he has been serving the military community as a contract and general schedule (GS) priest (also known as an auxiliary chaplain or a civilian priest) for the military. As a GS priest, Father Barrera is an employee of the U.S. government, and not a uniformed and ranked military chaplain. He has served at the Naval Support Facility (NTF) Diego Garcia, an atoll of the Chagos Archipelago in the British Indian Ocean Territory, Dyess Air Force Base in Texas, Edwards Air Force Base, and presently Nellis Air Force Base in Nevada, where he is currently stationed.

Father Barrera recalled when he met with Bishop Dorsey in January 2003, and was asked to consider being appointed administrator pro tem of Holy Spirit Parish in Lake Wales.

“After listening to the specifics of this assignment, I accepted and said to the bishop, ‘OK, bishop, and what’s next? Without hesitation he replied, ‘What’s next? Luis, one day you may become pastor to some, but you are and always must be a priest to all. Pastor to some, priest to all,’” he recalled. “Obviously, Bishop Dorsey was not referring to a mere canonical technicality. He was underscoring that, throughout the flow of special assignments, I was to remain true to this undeserved calling, this unmerited gift: my priestly vocation. Those words of the good bishop have stuck in my mind. And after twenty-five years, I have come to appreciate more and more the challenge and the opportunity to serve God and his people in persona Christi, by preaching the word and by celebrating the sacraments.”

Father Barrera’s vocation has taken him throughout the diocese and the country, where he has witnessed firsthand “the universality of our Church.”

“I definitely see myself as a coworker in God’s vineyard, promoting the cause of the Kingdom. Of course, with the ups and downs, the successes and failures that accompany the human side of this endeavor, I am grateful and honored to have served the amazing and holy people of the Orlando diocese in so many places,” the priest wrote. “Blessings to the people of Orlando. Together, let us raise high the flag of faith, hope and love in this time of crisis and perplexity.”