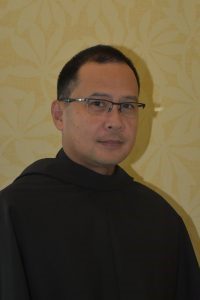 As a child, Franciscan Father Nelson Javier participated in Mass each week with his parents, Dominador and Angeles, and his seven brothers and sisters in Dagupan City, Philippines. Each week he would notice a group of young men in the church from the seminary next door and he became fascinated and curious about what their life was like. However, it wouldn’t be until personal tragedy struck in his college years that he would find out for himself.

“Experiencing the loss of our parents in the expanse of six months, my first year of college, I began to ponder the religious way of life, always drawn by the Franciscan Spirituality,” recalled Father Javier. “Upon entering [the seminary] it was the constant nurturing of this desire ‘seed’ that became and bloomed to a calling to the priesthood.”

Father Javier entered Mary, Help of Christian Seminary in the Philippines and then St. Tommaso Seminary in Messina, Italy. He was ordained as a friar of the Third Order Regular of St. Francis (TOR) on September 28, 1996 for the Province of Sts. Joachim and Ann in Sicily. After his Ordination, he served in parishes in Italy until 2012 when he was transferred to the Province of the Immaculate Conception in the United States. He began his ministry in the Diocese of Orlando in residence at St. Joseph Parish in Winter Haven and now as parochial vicar of St. Patrick Parish in Mount Dora where he has served since 2013. He has also served on the Presbyteral Council and is involved with Ministry to the Filipinos.

“Always simple in poverty, cheerful in chastity and obedient in brotherhood is what stands out during these 25 years. The blessing is to meet lots of people, be touched by God’s grace, enriched by others and continue to serve God in His Church,” reflected Father Javier. “I hope to always be that instrument of peace.”