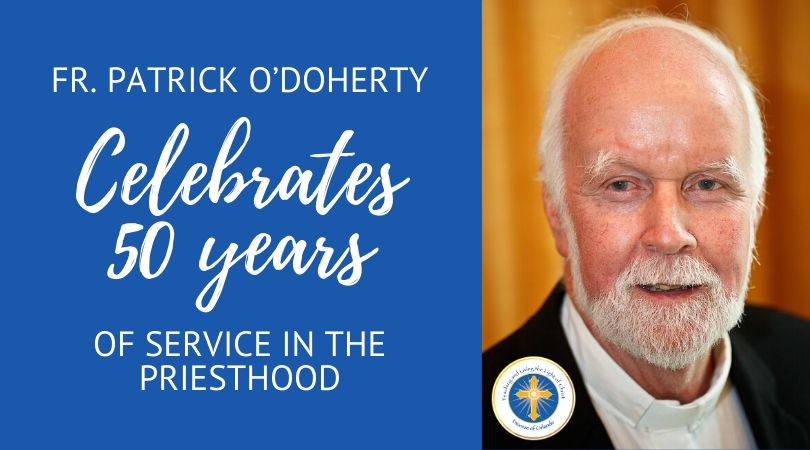 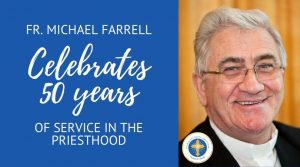 Two Irish-born and raised priests will celebrate their 50th anniversary to the priesthood June 13. On that day in 1970, Archbishop Thomas Morris of the dioceses of Cashel and Emly, Ireland, ordained Father Patrick Joseph O’Doherty and Father Michael Augustine Farrell, who both attended St. Patrick Seminary in Thurles, Ireland. They were ordained to serve their ministry in the Orlando Diocese.

Father O’Doherty was born May 26, 1946, one of nine children, including six brothers and two sisters. He has served as pastor of Queen of Peace Parish in Ocala for the past 25 years. On the occasion of his 25th anniversary, Father O’Doherty said his belief in reconciliation has sustained his vocation.

“St. John of the Cross told us that ‘the diseases of the heart rush in on horseback, but leave slowly on foot,’” he said. “I’ve been in trouble, but the Lord is forgiving. The most rewarding part of my ministry has been the sacrament of reconciliation (because) it is there where I’ve seen great blessings given to people.”

Father Farrell was born Aug. 14, 1945, at Craughwell, County Galway, in Ireland, one of nine, including three brothers and five sisters. On the occasion of his 25th anniversary, Father Farrell, who was pastor of St. Joseph Church in Palm Bay said, “Being a priest most days is not easy. Certainly it is a challenge, but I am glad to have accepted the challenge in the Diocese of Orlando.”

Before his retirement in 2014, Father Farrell served as pastor of Divine Mercy Parish in Merritt Island, where he served since 1998. At a farewell Mass and celebration, parishioners recalled his “challenging and heartfelt homilies” and the way he constantly spoke of God’s unconditional love for them. He gave comfort to them during their times of trial, encouraging parishioners not to dwell on adversities, but to stay engaged in the faith.

“I hope I am remembered as being a caring, joyful servant leader,” Father Farrell said. “The greatest blessing of my priesthood has been being able to help people who are hurt and in need.”

Although his retirement has including hobbies, such as golfing and reading, he also spends his time in reflection and continues to serve Divine Mercy when needed.