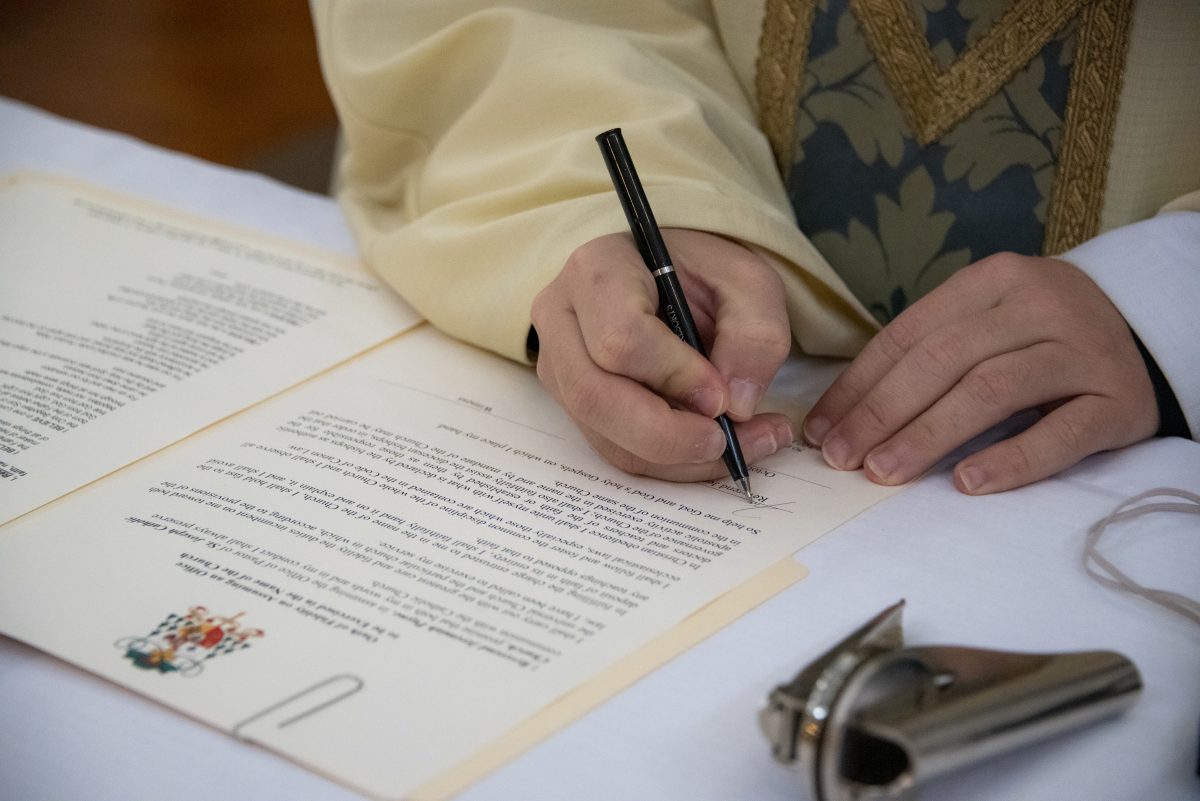 PALM BAY | Baptized Methodist, but raised with little religious formation, as a teenager Father Jeremiah Payne joined the Assemblies of God where he preached and taught. Prepared to become a Pentecostal pastor, his research ultimately led him to the Catholic Church. On Oct. 25, this vibrant convert to the faith, known for his vast knowledge and powerful homilies became the 20th pastor of St. Joseph Parish in Palm Bay. “I am standing on the shoulders of giants,” he said.

Bishop John Noonan noted, “Priesthood is God’s gift of service the His people; when a priest becomes a pastors he is called to deepen that gift of God for all the people.”

Father Payne said three events led to his conversion. First, as a high school student, his study of martyred Archbishop of Canterbury Thomas Becket, left him wondering how a Catholic could be so convicted by Christ that he would die for him. Then, when he accepted an invitation to a midnight Mass in an Anglo-Catholic Parish in Ocala, he decided he would go to “expose the cult for what it was.” Instead he was drawn in. “The beauty of the liturgy enraptured me,” he said in an autobiographical article he wrote while teaching theology at St. John Vianney Seminary in Boynton Beach. Again, he paused to consider what God was revealing to him. Finally, asked to teach an adult class on the life and worship of the early church, he felt compelled to do thorough research. There he discovered the Church Fathers, and the rest is history.

He acknowledges the good work his first community imparted. “They taught me to love Jesus with all my heart, to pray with earnest fervor, to trust the work and movements of the Holy Spirit in my life; and to serve others with joy,” he said.

Along the way, he also recognizes key people who led him to God. The pastor who comforted him on the day of his beloved grandmother’s funeral with the story of resurrection in Christ. The babysitter and family friend who “shared the Gospel with me more directly during a struggling time in my life… a clinch moment.” And a parishioner of Blessed Trinity, Ocala, who became instrumental in his conversion to Catholicism.

After shepherding St. Joseph’s for two years, he is committed to taking on the long-term commitment of being pastor. Founded in 1912 by 40 farming pioneer families, the parish community now boasts 1,750 families. Realizing faith formation students know, “Jesus loves me” but do not know who Jesus is, what love is, or who they are, he decided things needed to change. He hopes his “dynamic preaching” will help. Infusing excerpts from tv shows and movies, he believes, “is a great place to start when it relates to the Gospel. Pop culture is always the touch stone of a lot of lives. It’s where lives intersect with common interests. So much of pop culture stuff reflects, even unintentionally, the heart seeking God.”

He also hired a new catechetical leader, a Steubenville graduate, to revitalize the formation program. He explains the faith regularly on Divine Mercy Radio and offers parish-wide deep dives into Scripture. Father Payne also tries to spend as much time as possible in classrooms at St. Joseph Catholic School. After implementing an “Ask Father” box, he makes his rounds, popping in and addressing their real-life application questions.

By Glenda Meekins of the Florida Catholic, October 26, 2020