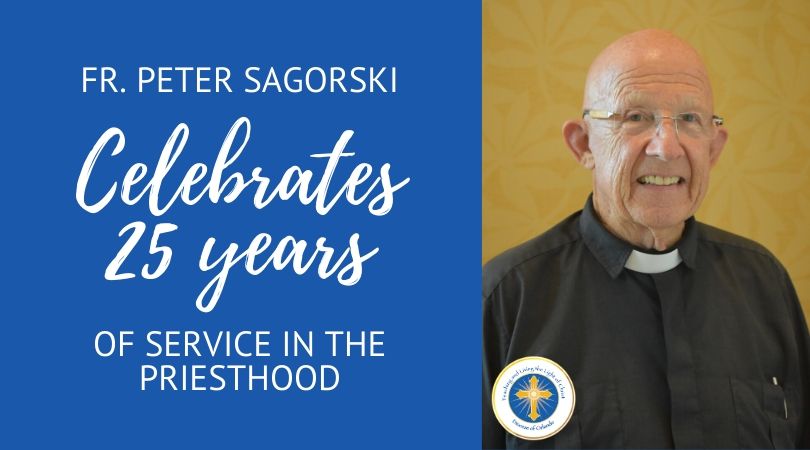 When Bishop Norbert M. Dorsey celebrated the ordination of men to the priesthood May 27, 1995, one man was already a father. Before entering the seminary and the priesthood Peter Sagorski was a loving husband and father of six. When his wife of 25 years died in 1986, the mechanical engineer at Kennedy Space Center decided to pursue a path to the priesthood as a late vocation.

At 83-years-old, Father Peter Sagorski — father of six and grandfather of three — recalled discerning the priesthood after becoming a widower. Even while married, the yearning to enter the priesthood was present.

“When I was married, I told my wife I wanted to go into the seminary,” he said, acknowledging the longing to preach God’s word. “It always interested me.” This desire always appealed to him because “everybody wants a good boss,” and he knew he could take that leadership role and provide his fellow Catholics with the inspiration and direction to become closer to God.

The advice he gives for other priests is a value he still lives by: he enjoys helping others by carefully listening to them. “Look at their (problems) in an objective way,” he said. “Let them know that you are interested in what they have to say and do it in a constructive way.”

He hopes for more unity in the world. “God came for everyone. God is in everyone,” he said, referencing the importance to accept other religions. “Unity among all people, because we all have a common God.”

Father Sargoski’s days are now filled with spending time with his loved ones, visiting family and attending youth sports games.

His first assignment as a priest was as parochial vicar of St. Paul Parish in Daytona. He then served as pastor of St. Lawrence Parish in Bushnell and its then-mission of St. Vincent de Paul in Wildwood. He retired after serving as pastor of Immaculate Conception Parish in Melbourne Beach.