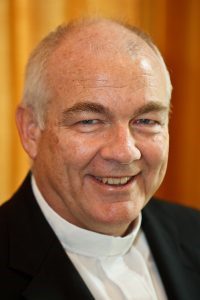 Father Tim Daly describes his calling from God as a pendulum, “swinging toward priesthood and then swinging away from priesthood.” Raised in a Catholic home, the only child of Frank and Cathy Daly, he first felt an inkling of a vocation in middle school while volunteering as an altar server, sacristan, rectory receptionist, and as an active member of the youth group. And though he attended a high school for young men aspiring to the priesthood, upon graduation Father Daly ultimately decided to pursue a degree in elementary and early childhood education. Father Daly would explore and discern his life’s calling repeatedly over the next several years, trying to reconcile what seemed to be competing desires; a career in education or a religious vocation.

“Sometime in my young adulthood, I developed my own special discernment prayer to help me with the many decisions in life, ‘Lord, lead me where you need me!’” said Father Daly.

The Lord would answer Father Daly’s prayer in surprising ways, leading him to spend two years with the Franciscans of the Holy Name Province, teach at an American school in Quito, Ecuador, earn a master’s degree in counseling and a Ph.D. in counselor education from the University of Alabama, and to teach at the college level at the University of Montevallo in Alabama, James Madison University in Virginia and the University of Central Florida in Orlando. Through it all, the “pendulum” call to the priesthood would return again and again, until one day, May 25, 1990, the swinging would stop.

“After my first year at UCF, I attended the installation of Bishop Norbert Dorsey at the old Orlando Arena. It was a very moving liturgy and I experienced, the “Church in the modern world,” remembers Father Daly. “Here in this very secular place, a very sacred event was occurring. I realized that the Church is truly the ‘People of God’ and that I was being called to serve them in the Orlando Diocese.”

Father Daly was ordained to the priesthood at St. James Cathedral on June 1, 1996. He has served the communities of St. John Vianney in Orlando, Prince of Peace in Ormond Beach, and is currently the rector of the Basilica of St. Paul in Daytona Beach. He has also been the president of Father Lopez High School, the secretariat head for Christian Life and Education, the vicar forane of the Eastern Deanery and currently serves as the director of campus ministry at Embry-Riddle Aeronautical University (ERAU) and on the Priest Personnel Board and Presbyteral Council. Looking back after 25 years of priesthood, it is clear the aspirations Father Daly had as a young man were not in conflict with each other, and that his calling was not so much a pendulum, but a long journey of preparation.

“I have seen how God prepared me for all I am doing now. Running a parish is like running a business just like my parents did in my youth. My elementary and early childhood background has been invaluable for the Basilica School. In campus ministry at ERAU, I continue to work with college students. My time in Ecuador prepared me to minister to those in the Basilica’s Hispanic community. As a priest, I do a lot of counseling and my training and skills from graduate school have prepared me to minister to the people of God, the Church,” said Father Daly.

“I pray on the 25th anniversary of my priesthood that the Lord will continue to lead me where He needs me and that I will continue to meet God in life as I use my gifts and talents to bring hope and minister to the Church, the People of God, the Church in the modern world.”