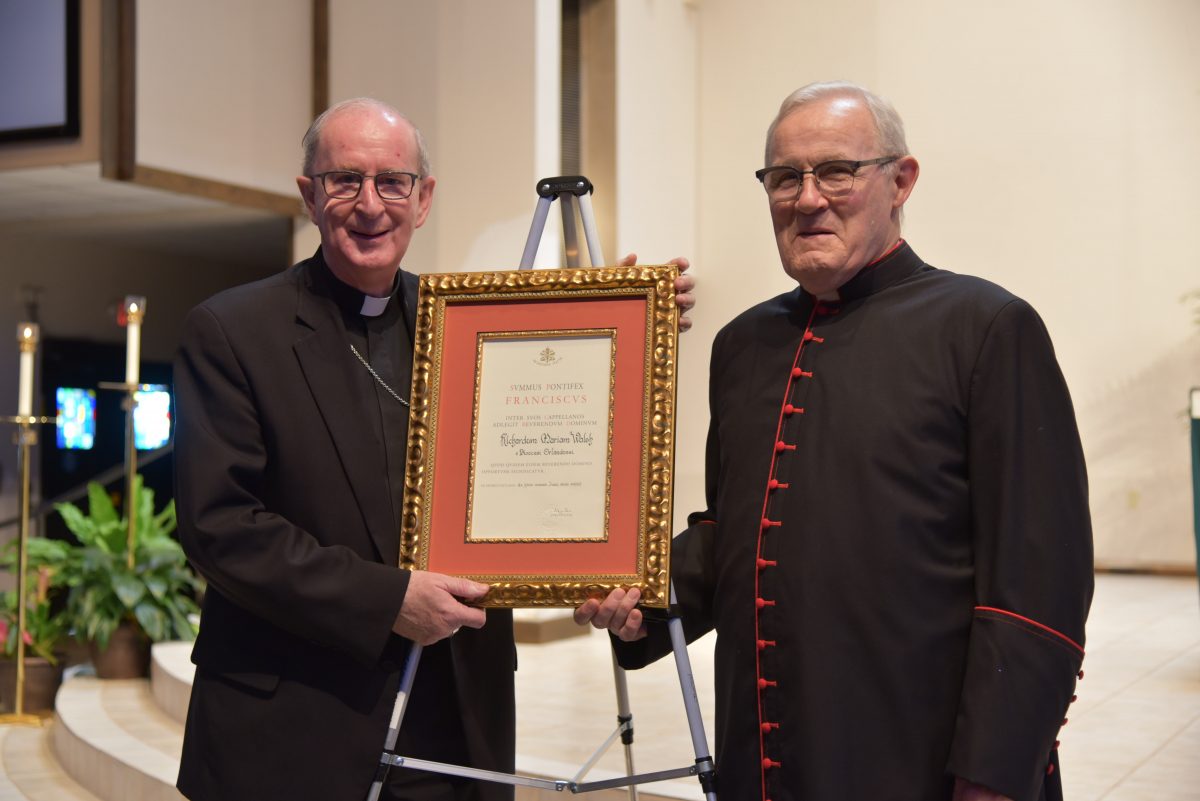 WINTER PARK | Mass at St. Margaret Mary Parish in Winter Park was just coming to a close, Sept. 15, when Bishop John Noonan of the Diocese of Orlando, walked into the sanctuary. He was there to announce that Pope Francis enrolled Reverend Richard Marian Walsh of the Diocese of Orlando as Chaplain of His Holiness given at the Vatican on June 28 during the Year of our Lord, 2019.

The new monsignor had just delivered his homily in his familiar, warm manner, expounding personal experiences to help bring his point home. This intimate commitment to the people of the diocese made the unexpected event all the more significant for his parishioners, who love their pastor and look up to him as a father and friend. With more than 50 years in the diocese, the visibly surprised pastor was moved, and discreetly wiped away tears.

Monsignor Walsh arrived in the U.S. in 1968, two months after his Ordination. His first assignment was at Our Saviour Parish in Cocoa Beach. He watched the space program grow, helped establish parishes and build schools in Haiti for many years. He has also been a great supporter of Bishop Grady Villas and served as diocesan administrator during the interim between Bishop Wenski’s departure and Bishop Noonan’s arrival in 2010. The Mayor of Winter Park, Steve Leary, even declared April 15, 2018 as “Very Reverend Richard M. Walsh” day in honor of Father Walsh’s 50th anniversary of his Ordination to the priesthood and his work within the diocese and in missions abroad.

Bishop Noonan recalled the monsignor’s homily, which noted three things, “The opportunity to experience the mercy of God… to look into our own lives and see where we are… and finally, to celebrate.” He spoke of how we celebrate those who pass on the faith. “We honor teachers, catechists, the people who share our faith and the chief shepherd is the one who makes sure you have that faith…,” Bishop Noonan noted. “God is the chief shepherd and Father Walsh is His representative.”

When Bishop Noonan began to dress him with his new cassock, Monsignor Walsh joked, “I think this was made for somebody else…” He was at a loss for words. As a long line of parishioners waited to congratulate their pastor, he smiled and hugged them – humbly accepting their many well wishes.

By Glenda Meekins of the Florida Catholic September 18, 2019