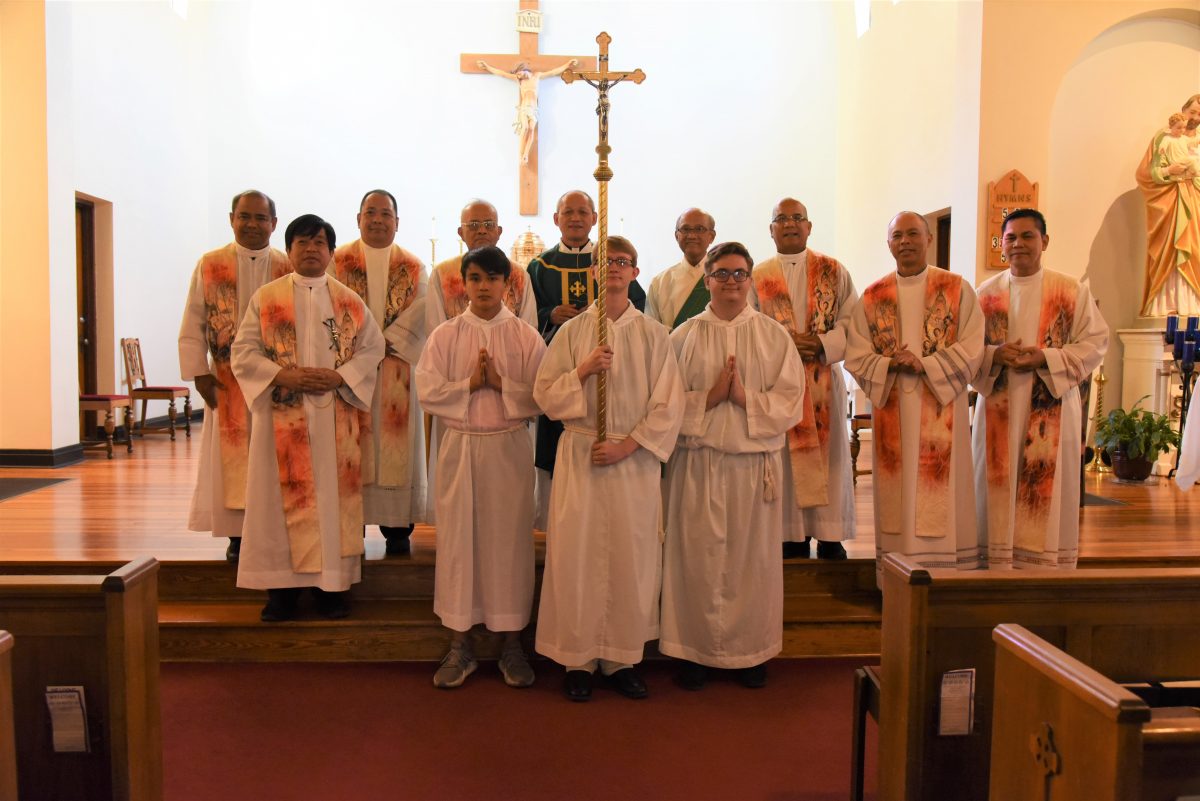 SANFORD | Filipinos from throughout the Diocese of Orlando joined at All Souls Parish in Sanford to celebrate the country’s first saint and martyr, San Lorenzo Ruiz de Manila, Sept. 22. Educated by the Dominican friars, San Lorenzo was an altar server, a trained calligrapher who later joined the Confraternity of the Most Holy Rosary. After being accused of homicide, he left his wife and three children, fleeing to Japan with several priests who were going to minister to persecuted Catholics in the region. All were captured and sent to Nagasaki, where they were tortured. San Lorenzo resisted renouncing his faith, remaining steadfast and encouraging his companions. He died in 1637. Pope John Paul II canonized San Lorenzo and his companions in 1987.

Six prayer and ministry groups from throughout the diocese, from Brevard to Orange and Polk Counties, formed part of the Mass procession as a choir made up of Filipinos from 10 different parishes sang in Tagalog and English. “I should say that San Lorenzo Ruiz de Manila found me,” said Vida Olson, Filipino ministry team coordinator from All Souls. “I always lived my faith, born and raised Catholic … One Sunday in church, somebody was looking for me to tell me that a celebration of the feast of San Lorenzo would be held in my church, and I needed to put this together. I was given this big responsibility and I had to act.” The ministry began with five people, and Olson says, “San Lorenzo was the glue that bound us few Filipino families in All Souls. Smiles I only knew on faces as acquaintances became extended families. Our devotion to San Lorenzo transcends to our children.”

The story is a familiar one to Raymond Bautista of the San Lorenzo Prayer Group at St. Francis of Assisi Parish in Apopka, which was founded by Father Val DeVera in 2008. Father DeVera was a pastor of San Lorenzo Ruiz church in Quezon City, Philippines for five years and brought the devotion to St. Francis of Assisi in hopes of encouraging devotion to the saint. The group meets once a week to pray for the deceased, sick and pray the rosary. Bautista said, “Before, we just saw each other in church. Now we are more united.”

“I migrated to this country, my kids were altar servers and faith is an integral part of our daily life,” notes Olson, explaining her affinity with the patron saint of youth, those working overseas and altar servers. This is why she and her team work so hard to pass on the devotion.

Father Archie Faustino, associate pastor of Holy Redeemer Parish in Kissimmee, noted how San Lorenzo’s suffering to defend his faith to the death teaches us. “It gives us a beautiful example in his person, as a model for us, when we experience those trials and pains and sufferings in life as well,” he said. “We learn this from Jesus also—that continuing to carry one’s cross until the end and even suffering, we can always hope and believe that in the end, there will be better times. With hope there will also be glory.”

Explaining why the devotion means a great deal to the Filipino people, Father David Vivero, pastor of All Souls, noted, “We live in a culture where there is so much indulgence and glorification and sometimes we even choose it over the truth of the Gospel. The importance of this celebration is that we need to become counter-cultural. Otherwise, it’s going to destroy us individually. It’s going to hit the family, the Church, the community, the country. This is how important this celebration is because we have to testify and witness to the truth.” He quoted San Lorenzo de Ruiz, “If I had a thousand lives, I would give them all to the Lord.” He added, “We need to protect our way of life, our belief, the truth about the Gospel of Jesus. We have to do this ourselves and start in our families.”

The celebration is in its 14th year (its fourth year at All Souls) as Filipinos vow to remember the cost of faith and celebrate the spirit of their people and heritage. Gathering for fellowship and to pass their customs and beliefs to their children, the assembly shared a feast of traditional foods and desserts (sapin sapin, babingka and puto ube) and dances (Banga and Pagapir) by the Filipino Ministry of All Souls Dancers. The feast day marks the recollection of a great saint, and one of several calendar events that enable the Filipino community to unite as one, despite being far from home.

By Glenda Meekins of the Florida Catholic September 25, 2019