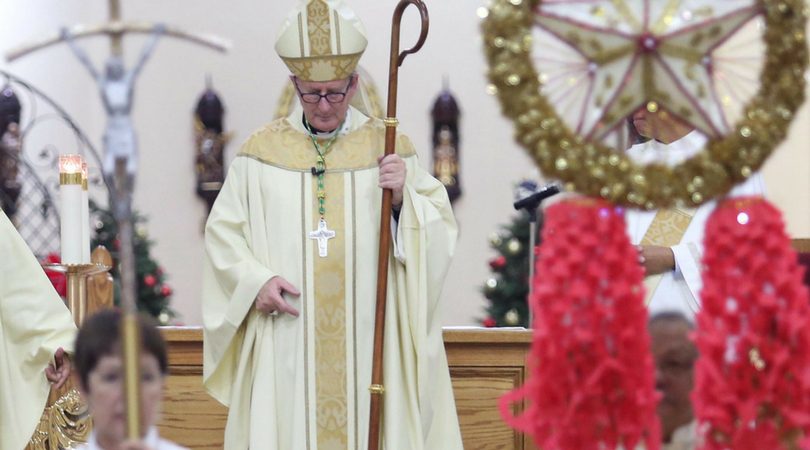 By Glenda Meekins of the Florida Catholic Staff – December 18, 2017

As they have for decades, the Filipino community of the Diocese of Orlando welcomed the birth of Our Savior with Simbang Gabi, a novena of Masses that began Dec. 15 at St. Timothy Parish in Lady Lake. The opening Mass of this treasured tradition was concelebrated by Bishop John Noonan and 17 Filipino priests from the diocese. Filipino parishioners of St. Timothy, the neighboring parish of St. Vincent de Paul in Wildwood and the Filipino community of The Villages, now numbering approximately 400, hosted the first novena Mass.

Tita Dumagsa, one of the coordinators for this year’s novena and a member of St. Timothy Parish said, “It is a unique and high honor to be chosen as the parish in the diocese to start the nine day novena Masses preceding Christmas.” She explained, “Simbang Gabi literally means ‘Evening Mass.’ In the Philippines, Simbang Gabi is held at the break of dawn at 4:00 a.m.”

The Christmas tradition was founded by the early missionary friars to the Philippines in the mid 1600s. The Masses were often called “Misa de Gallo” or “Rooster’s Mass” because the early morning call of the roosters summoned the Christians to come and usher in the Lord’s birth.

As the voices of the highly acclaimed 50-man Filipino choir of the Diocese of Orlando sang familiar hymns, Manolita Dinggay Ocampo reminisced. Ocampo came from her hometown of Malate, in the district of Manilla to the U.S. in 1967. Although a new parishioner of St. Timothy’s, she went to the parish for years during her annual vacation. Coming from Connecticut where there are few Filipinos, she loves coming to Simbang Gabi and finding such a large Filipino community, “It’s like going back to my roots. It’s like going back to my country.” She added, “Simbang Gabi is a tradition for us. Growing up that was always part of a preparation for Christmas. It started in little towns and villages. They would ring the bell and wake up everybody – from the oldest to the youngest. They would get up and go to church to prepare for the birth of Christ.”

Three generations later, she is glad to be a part of the Filipino community that enables her to share in what was a part of her childhood. She will ultimately spend Christmas Eve, the final night of Simbang Gabi, with relatives up north, “40 or 50 of them from ages 4 months to 78.”