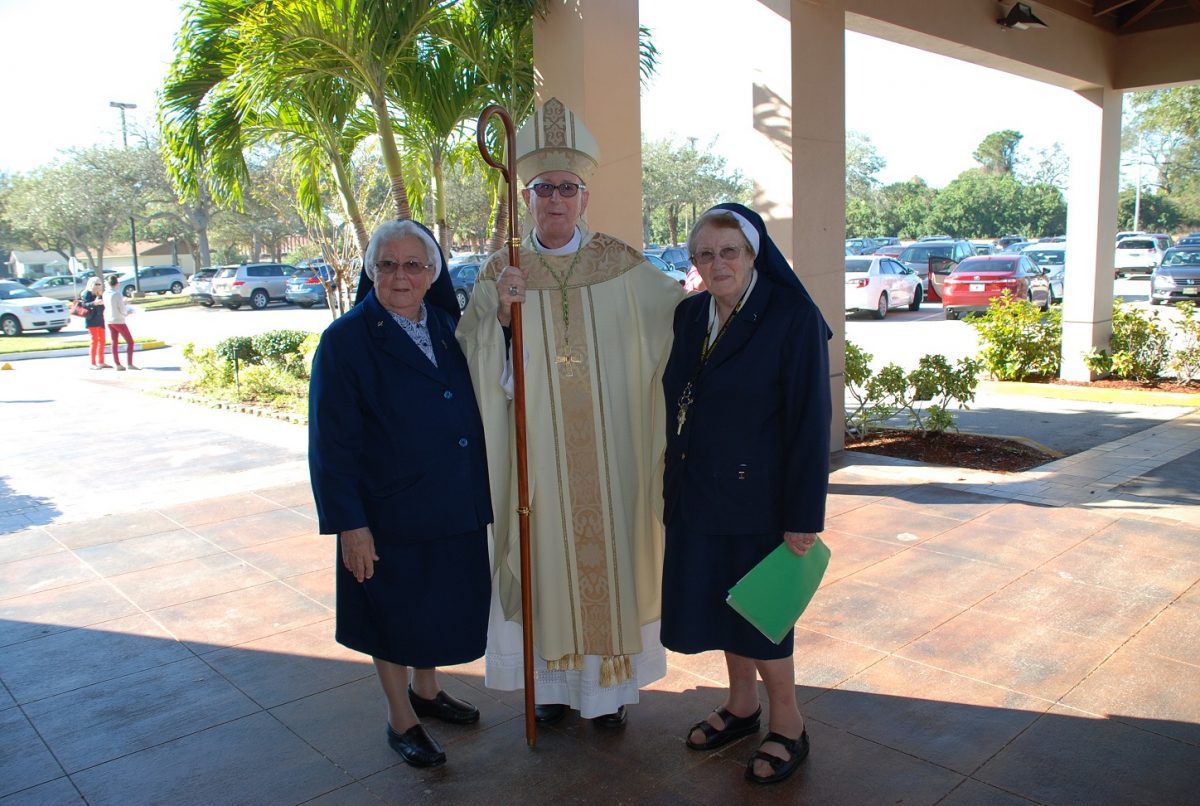 MELBOURNE | After more than 50 years, the Diocese of Orlando bids a fond farewell to Sisters of Mercy, Sister Immaculata Knox and Sister Joseph Barden. Both travelled from Ireland to the United States to educate fellow Catholics and care for people in need.

The two sisters met at the Convent of Mercy in Ardee, County Louth, Ireland, in 1957. On the day Sister Barden had her first interview for the novitiate, she admits she was rather nervous. “And who opened the door, but Sister Immaculata,” said Sister Barden. “I thought she was a very friendly person. She had a lovely smile and was very nice to me because I was a bit scared.” What followed was a long friendship filled with laughter and a love of service and teaching.

Sister Knox was first to arrive in Melbourne in 1961 and helped establish Ascension Catholic School. She would teach there for the next 45 years, until she became director of pastoral care at Ascension Parish—visiting the sick, incarcerated, and helping the poor.

Following suit five years later, Sister Barden arrived in Indialantic to teach at Holy Name of Jesus Catholic School. She became principal at Ascension in 1971 and remained so until 2000, when she was appointed director of development for the school. Under her direction, Ascension Catholic School expanded with a new gymnasium, library, science lab and religious education offices. She said, “I loved working with the children, especially during the science fairs,” where she was actively involved. In fact, the science lab was named after her due to her efforts in making the program highly recognized on the Space Coast.

Sister Barden says her proudest moment was when Ascension Catholic School was selected by the United States Department of Education as a National School of Excellence in 1986. She went to the White House to receive the award with Father Val Sheedy and the assistant principal. She recalls, “That was one of the greatest things that happened to me.”

Sister Barden says she will especially miss the children. “I don’t know what I’ll do without them,” she said. “I love the children, especially the little ones. They say the funniest things.” She recalls going down to Sister Knox’s kindergarten class to listen to the students “when things got tough in the principal’s office. That really cheered me up a lot,” she remembered.

She added nostalgically, “We are leaving behind the spirit of our foundress, Catherine McAuley. I’m hoping that will go on. Right now, the principal of our school was here the first year, in the first grade. We taught her… so we’ve come full circle.”

Sister Barden hopes to pursue her love of cooking, photography and gardening despite her arthritis. She assures, “I won’t be sitting down all day.”

Meanwhile, the dynamo known as Sister Immaculata Knox, also plans to remain active. Hoping to continue her hobby as an artist, she jokes she may begin “a cottage industry” with her paintings. Last year, in an article written by an Ace Reporter from St. James Cathedral School, the student referred to Sister Knox as “hilarious.” Sister, who once dreamt of becoming a stand-up comedian, simply responded, “I couldn’t ask for anything better. If you make people laugh… your face tightens so you really don’t need Botox.”

The religious who went skydiving at age 80, also applied to be the first teacher in space, and accidentally ended up on Patrick Air Force Base’s runway on the stairway of a plane that was awaiting orders for the Bay of Pigs invasion says, “The Lord’s hand is in it all. It’s a new adventure… I live in the sacrament of the present moment.”

She said she will miss her kindergarteners whom she taught for 42 years. “They’re the real people,” she said. “They tell you exactly what’s on their mind. It’s all very real to them. Talk about the present moment; that’s where they live.”

Both sisters received the Pro Ecclesia et Pontifice award from Pope Francis in 2018 in honor of their work in the diocese and Catholic schools. Sister Barden received a proclamation from the City of Melbourne thanking her for her years of service at Ascension and in the community. Sister Knox was selected Brevard County woman of the Year in Education, awarded as part of the National Women’s History Project. She was the first religious to be selected for the award.

Bishop John Noonan noted in a congratulatory letter to Ascension Parish on its anniversary, “Such leaders as Father Martin Power, Monsignor Val Sheedy, Father Frank Smith, Father Eamon Tobin, and our dear Sisters of Mercy, Sister Immaculata Knox and Sister Joseph Barden, laid a foundation of faith to bring forth the breath of the Holy Spirit upon God’s holy people that you would know peace.” It is that peace, delivered through joyous witness that school families and parishioners will miss the most.

Sisters Knox and Barden return to Ardee, June 13, to live in a retirement village across the street from their old convent. “We have a pile of adventures left,” said Sister Knox. Ascension Parish will bid them a fond farewell after the 11:30 a.m. Mass on April 28, which also celebrates the parish’s 60th anniversary. All are welcome.