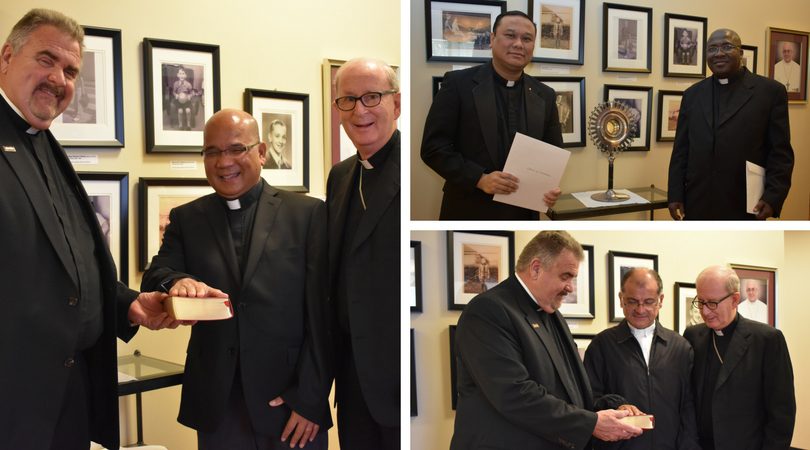 Combined, Father Percival DeVera, Father Alvin Enri, Father Nazaire Massillon and Father Luis Osorio, have spent nearly 35 years serving the Diocese of Orlando, but it is only recently that they officially call the diocese “home.” During the month of April, these four priests completed the process of incardination, or the transfer of allegiance from one diocese and bishop to another.

“Priests come here from other dioceses or religious orders,” explained Father John Giel, Vicar General for the Diocese of Orlando. “After three years they can go through the incardination process. Once approved, they take an oath of fidelity and are brought into this diocese as an official member.”

Coming from the Philippines, Colombia, and Haiti, these priests enrich the local Church in Orlando with their diverse cultures and especially their love for God and the communities they serve.

Father Nazaire Massillon began his priestly ministry in his native Haiti with the Congregation of the Immaculate Heart of Mary. As a missionary, Father Massillon first served in Mexico and Brazil before being assigned to St. Catherine of Siena Parish in Kissimmee in 2010. The community had a deep impact on him and before long, Father Massillon had an overwhelming feeling that this diocese is where he belongs.

“I have served at St. Catherine of Siena my whole time in the diocese. The greatest blessing is the acceptance and love of the people there,” said Father Massillon.

Bishop Noonan joked during the incardination that Father Massillon cannot leave the parish because, “We’d have to replace him with three priests! He says Mass in English, Spanish, Creole and Portuguese.”

“I’m very happy and grateful to Bishop Noonan and to God. I will continue to do my work and do my best to live the Gospel,” said Father Massillon.

Father Alvin Enri said it was “divine providence” that brought him to the Diocese of Orlando. Father Enri was ordained in the Capuchin order and came to Orlando from the Philippines six years ago to serve the Filipino community at St. Joseph Parish in Orlando.

“I had no intention of coming here and the first time that it was offered to me, I declined and gave a resounding ‘No’ for an answer,” recalled Father Enri. “But I always believed and trusted in God’s providence and to do His will has always been my intention throughout my life’s journey. So, a year passed by and the offer came back. This time I was ready to say “Yes Lord, thy will be done.”

Father Enri is currently an associate pastor at Holy Family Parish in Orlando and he is grateful for the opportunities he has been given to serve and love God and His people through that community.

“The joy and gratitude is so overwhelming that I can sing the Magnificat with our Mother,” said Father Enri. “We just need to obey and to trust Him more who knows what is good and right for all of us.”

Father Percival (Val) DeVera was serving the Diocese of Queens, New York when the long, cold winters finally became too much for the native Filipino to handle.

“I looked for a place with weather that was closer to home and I settled on Florida,” remembered Father DeVera.

He may have come for the weather, but he has stayed for the people. Since arriving in the diocese in December 2006, Father DeVera has served St. Francis of Assisi Parish in Apopka, Holy Redeemer Parish in Kissimmee and St. Anthony Parish in Lakeland, where he currently serves as pastor. In each place he said he has found a loving, prayerful, supportive community. He has additionally been blessed by “a strong brotherhood of Filipino priests” in the diocese. Father DeVera is very active in the Ministry to Filipinos and is a member “AhMen”, a singing group of local Filipino priests who give concerts around the diocese.

“Being incardinated gives me a feeling that this is my home,” said Father DeVera. “I’ve been serving the diocese for almost 12 years now. I belong to this place.”

Like Father DeVera, the warm Florida weather was one of the draws that brought Father Luis Osorio to Orlando. He was also interested in being closer to his home in Colombia, South America. A chance meeting with a Diocese of Orlando priest at a Conference of Hispanic Priests in Colorado Springs in 2008 convinced him to make the move from the Diocese of Charlotte, North Carolina to Central Florida.

“The word “Catholic” means universal. Here in Orlando there is a big diversity of priests from different countries and cultures that make universality so easy to experience in a small territory,” said Father Osorio. “This is a big blessing.”

Upon his arrival in July 2009, Father Osorio served as assistant pastor at St. Mary Parish in Rockledge. He was transferred to St. Joseph Parish in Lakeland in September 2016, but that assignment lasted only one week when the death of Father Norman Farland left an immediate need at the Centro Guadalupano Mission in Wahneta. Father Osorio has been serving the migrant community there as parochial administrator ever since.

“I think the greatest blessing as a priest is continuing to serve the people of God. In spite of being in a different place than where you were ordained, the need is everywhere,” said Father Osorio.