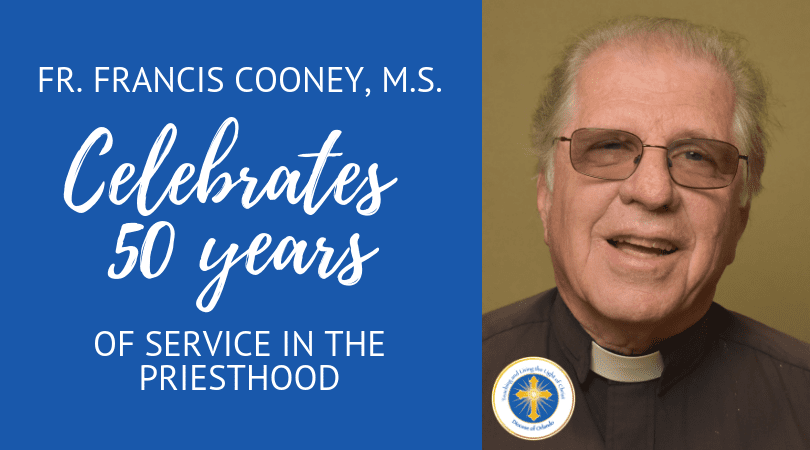 When he was in the second grade, a young Father Francis Cooney recalled he “just had the urge” to heed a call to God. Decades later, he still heeds that call with a half of a century serving throughout the world as a Catholic priest. Father Cooney, ordained with the Missionaries of Our Lady of La Salette, still finds his daily motivation by “carrying on God’s work.”

From 1970 until 1991, Father Cooney served mission parishes in Argentina, including in Cordoba, Las Termas, San Augustín and Santa Fe. He played an intricate role in the formation of an Alcoholics Anonymous group by helping others afflicted with addictions, which would later turn into the chief group of Santiago del Estero. While there, Father Cooney sharpened his usage of the Spanish language so much that he is now bilingual. “I survived,” he said, referring to the friendly Argentinian community helping his transition while learning the culture in the South American country.

Upon his return to the United States, more than two decades later, Father Cooney returned to Hartford and was appointed to pastoral ministry of Our Lady of Sorrows Parish and Immaculate Conception Parish. Regarding his influences as a priest, Father Cooney quickly referred to the Bible, which he reads every day. He had difficulty choosing a favorite passage before finally deciding on a quote from Matthew 4:19 — “He said to them, ‘Come after me, and I will make you fishers of men,’” referring to his salvation through Christ alone. Reflecting on his missionary services, his next inspiration went to St. Francis of Assisi because of his relatable duty “to work with the poor.”

Father Cooney expects other men hoping to enter the priesthood one day to raise the important question, “What does He want to do with my life?” He said youth examine the many questions one must answer before choosing the priesthood. For example, “What is their major interest?” Before making priesthood an option, “investigating all different aspects” should be performed first, he said.

Reaching 50 years now as a priest, Father Cooney devotes himself to Christ as he still works in the ministry at Good Shepherd Parish in Orlando as a parochial vicar. Every Thursday, he plays a game of golf, where he “gets some Vitamin D and chases the ball around” with his friends.