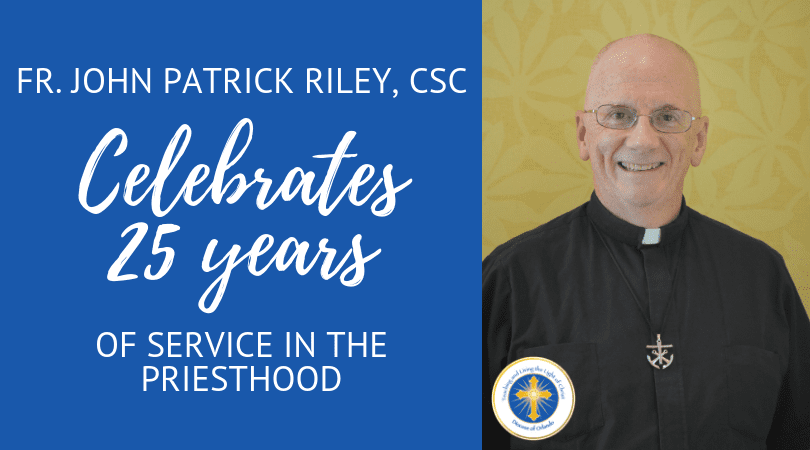 “Duty has always been a major motivation” for Congregation of the Holy Cross Father John Patrick Riley. The native New Yorker currently serves as parochial vicar of St. John the Evangelist Parish in Viera, and celebrates 25 years in the priesthood. He said he likes to believe he shares characteristics with one of his idols, St. Patrick. “He was a great missionary who loved his people and loved the church and brought them together,” Father Riley said.

Father Riley served in countless duties for his parishioners, such as visiting the sick and dying, overseeing wakes and funerals, and celebrating the Sacraments of Baptism and Confirmation. His desire to help people across different parts of the world is notable, as well. Father Riley spent a few weeks as a missionary priest in Uganda, but then caught malaria and returned to the United States to continue ministry.

Becoming a priest wasn’t the first choice for Father Riley, even though he admired parish priests of the Diocese of Buffalo where he grew up. The possibility seemed to blossom once he graduated from high school, even as he considered marriage after a stint in the Army. It wasn’t until he realized priesthood was “a call from the heart” that he began his adventure with the Lord. “I discerned that was God’s will for me,” he said.

He took his first vows August 12, 1989, and later became an ordained priest on April 9, 1994. Father Riley has degrees from both the Jesuit Canisius College of Buffalo and the University of Notre Dame Law School. He served as an Army Judge Advocate Officer on two marriage tribunals, and served as a chaplain for the Courage Roman Catholic Apostolate that provided sacramental assistance to those conflicted with same sex attraction. He currently serves as chaplain for the Courage apostolate in the Diocese of Orlando. “My hope is in the mystical body of Christ and His divine mercy,” he said. He finds solace in the continuing of his faith by maintaining his religious vows.

For any young man looking to follow in St. Patrick’s footsteps like he did and enter the priesthood, Father Riley said, “Contact the diocese and investigate the priestly life.” Father Riley hopes those he serves see him as a humble parish priest, who prays daily to give thanks to the Lord, and who would like to see less pride and more humility in the world. “I am a morbid Irishman who looks forward to the supreme happiness of the life to come.”