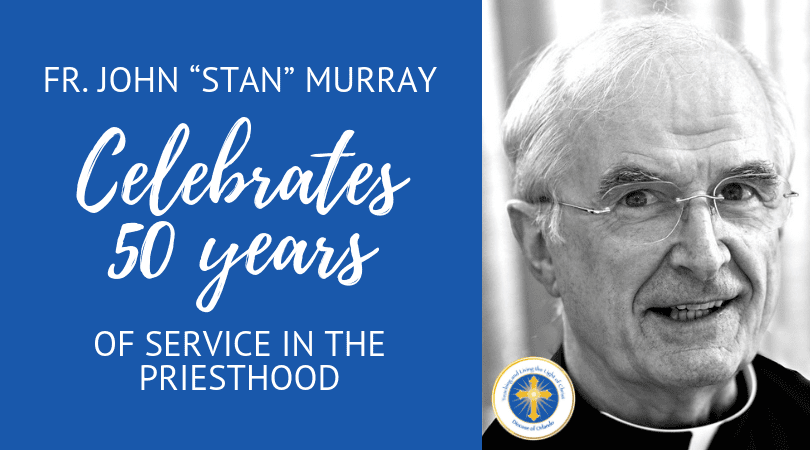 As Father John Murray looks back at his 50 years as a priest and serving the Catholic Church, he shares, “I did it for the people.”

Hailing from across the pond in County Kildare, Ireland, Father Murray attended the local parish as a child. With a religious background that included a mother who had inspired him to pray frequently to St. Jude, Father Murray knew from a young age that becoming a servant of the Lord was part of his future.

“I was thinking about it for some years,” he said about his entrance into the priesthood. Born in 1942, he was ordained in 1969 for the Diocese of Orlando. His very first assignment was on Merritt Island at Divine Mercy Parish. “I wanted to do something with my life that would make a difference,” he said, quickly noting that his answer may sound cliché. “But I feel that I have something to offer. I feel that I can still (50 years later) make that difference.”

The last 50 years has made Father Murray “grow comfortable with the Catholic Church,” and he doesn’t see any need for changes to arise that would alter the Church’s message. His advice to other men pondering the possibility to serve God as a lifelong profession, “Give it a try. Apply to seminary. With the Lord’s guidance, you would know.”

A voracious reader of “all types of novels,” Father Murray passes his time with music, such as Mozart and Beethoven. “I listen to classical music from a satellite (radio),” he said of his hobbies and interests during any down time. When asked which Scripture verse gives meaning to his ministry, he referred to Psalm 46:11, “Be still and know that I am God! I am exalted among the nations, exalted on the earth.”

Father Murray has returned to his mother country throughout the years. He tries to go once a year, and plans to return within the next few months for vacation. “The people are lovely in Ireland,” he said. “It’s cold as all get out.” But the weather is nothing as compared to seeing the people in Ireland and the mission he has had as a Catholic priest for the last 50 years. “We go because of the people,” he said.