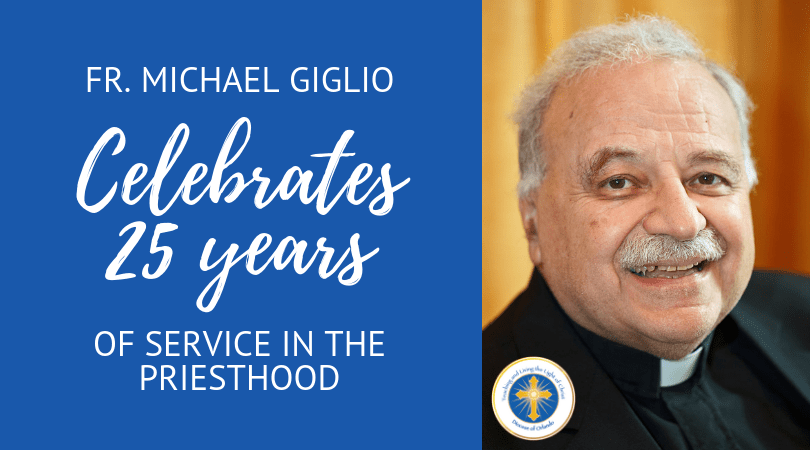 With a love for helping others, it was no wonder Father Michael Giglio became a priest after retiring as an English teacher. It was his concern for people that drew him to enter the priesthood at such a late age. For 30 years, he instructed children in the classroom, in everything from Latin to Shakespeare. While teaching and earning his master’s degree in English, the ministry had a profound influence on his eventual decision to follow his dreams of entering the seminary. “The thought (of priesthood) was always with me,” he said. “But I didn’t act on it. I was very involved in my work as an English teacher.”

A Brooklyn native, he attended St. Catharine of Alexandria, where the seed for priesthood was planted. He had served as a member of the parish council, Extraordinary Minister of Holy Communion, lector, and religious education teacher. The realization of retirement made him examine his purpose and how to utilize his spare time to help others. He went to Pope St. John XXIII National Seminary in Weston, Massachusetts, where older seminarians go to prepare for Ordination.

In a 1994 article from the Florida Catholic, as a transitional deacon, he commented on those who influenced his discernment and vocation. “The Vincentian Fathers at St. John’s Prep and Niagara University (where he earned an undergraduate and master’s degree) had a great influence on me,” he said. “I’ve always had an interest in and a concern for people, and I’ve been conscious of following Jesus’ ministry. That’s what attracts me to the priesthood.”

Ordained at age 55 on May 28, 1994, Father Giglio has been consistent in his passion for helping others. As a diocesan priest, Father Giglio was pastor of three parishes: St. Anthony in Lakeland, St. Teresa in Titusville and Epiphany in Port Orange. He also assisted at several others, including his first assignment at Holy Family Parish in Orlando. Now, at 82, he finds his motivation in “continuing in the ministry as best as I can, and to help out in the parishes, and to hear Confessions.” Reaching his 25th anniversary has solidified why he became a priest. Although he has been retired for a while, he still takes pride in assisting at St. Margaret Mary Parish in Winter Park. “The big reason is to serve people, to help people no matter what the circumstances,” he said.