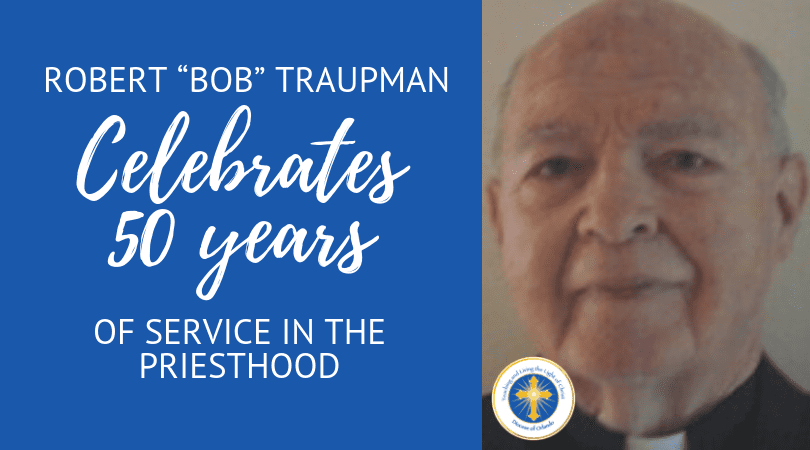 Father Robert John Traupman was born in 1943, the first and only child in his family. He has lived in Florida on and off since age seven. He was 26 years old when he received the Sacrament of Ordination from Bishop William Borders, the first bishop of Orlando. It was 1969, and the diocese itself was just one year old.

Father Traupman received a Bachelor of Arts in philosophy from St. Mary’s Seminary in Baltimore and a Masters of Arts in theology from Catholic University of America in Washington, D.C.

He served as assistant pastor at Holy Name of Jesus Parish in Indialantic from 1969 until 1972. He taught at Melbourne Central Catholic.  He was also liturgical coordinator and secretary to the liturgical commission of the diocese in the early 1970s. Father Traupman was later assigned as chaplain to Mercy Hospital in Orlando in 1975. In 1989 he began writing, Arise, a reflection letter, and shared that with many throughout the Diocese of Orlando for 25 years.

He was associate pastor of St. Margaret Mary Parish in Winter Park from 1976-1979 and then went to serve in the Archdiocese of Miami. Father Traupman says he served in Baltimore, MD at St. Pius X Parish from 1994-2006.

In 2008, Father Traupman retired to Fort Lauderdale, appreciating the time for deep contemplation and silence. “Though these days my priesthood is mostly interior, I am joyful and free,” he said. “Just loving my Lord, Jesus, as best as I can.”

By Jennifer Drow, Special to the Florida Catholic – March 2019