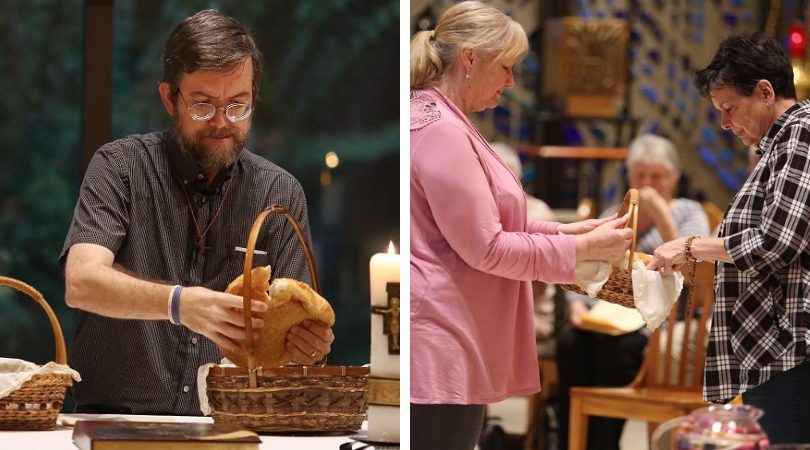 WINTER PARK | It is dusk and the sun’s fading hues penetrate the large glass wall that stands behind the altar at the Mary, Mother of God Chapel at San Pedro Spiritual Development Center in Winter Park. A small procession enters, the St. Francis candle representing his light in the world leading the way, followed by others, one carrying the Book of the Gospels, another with two loaves of bread and another with water. It is the eve of the Feast of St. Francis of Assisi, a night in which professed religious and lay Franciscans all over the world gather to commemorate the solemn hours before their patron’s death, on Oct. 4.

The commemoration is known as Transitus, the Latin word for passage and celebrates the journey from this life to eternal glory. It is a tradition dating back to the saint’s canonization in 1228. “When we celebrate the passing of St. Francis from this earthly life into eternity, we honor a saint who embraced his human mortality as ‘sister death’,” explains William Shade, O.F.S. Shade is the Minister of Lady Poverty Fraternity of secular Franciscans. He comes each year to pay his respects and recommit himself to his vocation.

St. Francis understood death in the context of God’s divine plan of creation and embraced it as a necessary step to be fully in union with God. In his own words, St. Francis reminds Franciscans and all faithful of our mission when he said, “I have done what was mine to do. May Christ teach you what is yours.”

“It’s always a great celebration,” noted Father Anthony Aarons, TOR and the Diocese of Orlando’s Missionary of Mercy. “For Franciscans, it’s similar to the Passover of Jesus because, in a sense, St. Francis said he wanted to re-enact that in his own life,” he explained.

Father Aarons recalled the first time he experienced a Transitus just after he had joined the Franciscan order, prior to becoming a novice at Little Portion Friary, NY. “It brought me to tears because, at the time we were commemorating the death of St. Francis, the bell was tolled 44 times to signify the number of years St. Francis spent on this earth. It was very moving,” he said.

“They had a habit laid out on the floor with five red votive candles at the spots where St. Francis received the stigmata. Therefore, that also reminded me of the words of St. Paul, ‘I bare in my body the marks of Christ crucified.’ For me, the crucifixion, the Passion of Christ crucified is very powerful and we see that in the life of St. Francis and I want to see that in my own life,” he noted.

“There was the reading of the washing of feet before he died and the taking of bread,” he added. “It shows how much we are connected with the Paschal Mystery of Jesus. So when we can see an ordinary human being experience that, it says, in the same way we too can experience that.”

The commemoration includes excerpts from Thomas of Celano’s book The Life of St. Francis describing the saint’s passing and detailing preceeding days. An excerpt reads: “While therefore the brothers were weeping very bitterly and grieving inconsolably, the Holy Father commanded that bread be brought to him. He blessed and broke it and gave a small piece of it to each one to eat. Commanding also that a book of the Gospels be brought, he asked that the Gospel according to St. John be read to him from the place that begins: “Before the feast of the Passover.” He was recalling that most holy supper which the Lord celebrated as his last supper with his disciples. He did all of this in reverent memory of that supper, showing thereby the deep love he had for his brothers.”

The service at San Pedro took part in the same ritual. Each member approached the altar to receive bread broken and poured out for the love of the world and then again to cleanse their hands – a symbol of purification and renewal.

Margie Sweeney is also a member of Lady Poverty Fraternity at San Pedro. The Incarnation Parish, Orlando parishioner attended the evening celebration and said, “It’s inspirational and a reminder of our path as Christians. We celebrate that there is a Promised Land that we will all, hopefully, be reaching. We are all on a journey and it is a call to be a secular Franciscan. It’s special to be a Catholic following in the footsteps of St. Francis because he was called to renew and rebuild the Church. Especially in our times, we are all called to be part of that renewal.”

By Glenda Meekins of the Florida Catholic – October 8, 2018