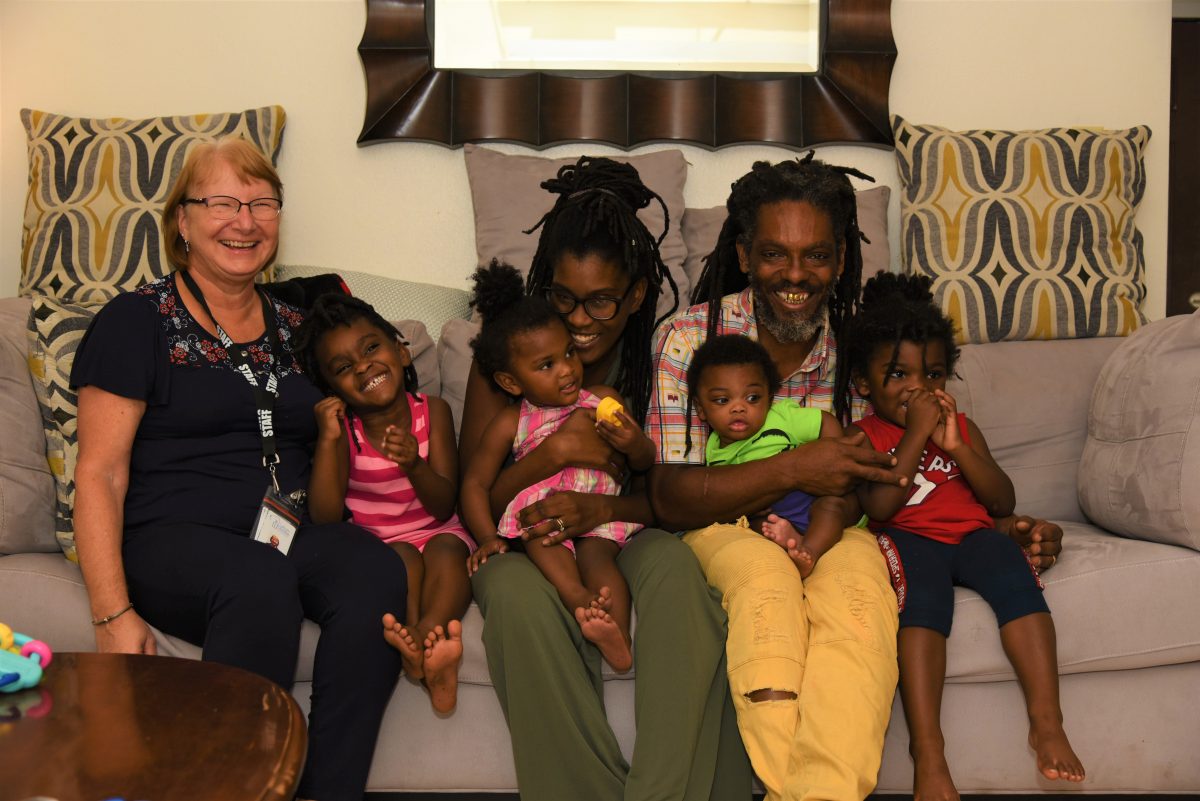 Catholic Charities of Central Florida case manager Anita Capetillo (left) sits with Patrice (center) and Earnest (right) Sanders and their family in their new home after being homeless for almost six months. Patrice delivered her youngest a month after moving in. (GLENDA MEEKINS | FC)

ORLANDO | Patrice Sanders recalls sitting in her mother-in-law’s driveway thinking her family had nowhere to go when the phone rang. Through a cracked, darkened screen, she fumbled to answer the call. It was Catholic Charities of Central Florida. For Patrice, “It was God.” She knew He had intervened in their darkest hour.

Earnest and Patrice Sanders’ case came to Catholic Charities Family Stability case manager, Anita Capetillo, in early March. “They were homeless on the street, sleeping in their car,” she remembered. The couple had three children under the age of five and at the time Patrice was pregnant. Although both were working and Earnest had two jobs, they couldn’t make ends meet. Their financial obligations exceeded their income, so in November of 2019, they were evicted. Most nights they slept in their car, getting an occasional break when a family member could take them in. They didn’t want to abuse their kindness or jeopardize their family member’s housing situation.

“Our house was a nearby gas station,” recalled Earnest. Because it is open 24 hours, they knew it was a safe spot – well lit, groceries if needed, and a bathroom. He would occasionally make a purchase so they wouldn’t be asked to leave. After a while, the attendant stopped charging them, recognizing  their situation.

In January 2020, Patrice went to the Homeless Services Network of Orange County, which works with agencies like Catholic Charities to assist with housing placement. The Orange County Rapid Rehousing Project began several years ago in an effort to reduce the homeless population in Orlando. Since then, agencies like Catholic Charities, through its Family Stability Program, have joined forces to improve the livelihoods of hundreds of homeless families like the Sanders. The COVID-19 pandemic impacted many families, making the difficult task of re-establishing stable housing almost impossible.

Capetillo met the couple in March and was surprised when she was able to find them a house by early April, just in time for Patrice to deliver her baby boy. After Florida’s COVID-19 stay-at-home mandate went into effect March 18 and evictions were prohibited, availability in the housing market dwindled. Capetillo recalled the difficulty she had experienced in finding vacancies for her Family Stability clients.

After living on the streets for five months, the Sanders were speechless.

Thanks to government funds provided to specifically assist people affected by the pandemic, Capetillo was able to pay for the couple’s utilities and get them settled. The Rapid Rehousing Project covers most of the rent, and will do so for up to 10 months, while the couple pays for the rest. The plan facilitates the ability for the Sanders to save and get back on their feet.

In addition, Catholic Charities’ Agape Mission Market on Semoran Blvd. in Orlando provides food when needed. Once the Sanders’ baby was born, diapers collected through the Walking with Moms In Need diaper drop came in handy.

From July 2019 to June 2020, Catholic Charities of Central Florida’s Family Stability Program assisted more than 1,500 families and fed more than 102,000 individuals. Thanks to private donors, the CARE Act and COVID stimulus packages, Catholic Charities was able to assist with $150,000 spent on rent/mortgage, utility assistance and other services for many affected by COVID, and continues distributing funds.

Capetillo just celebrated 25 years with Catholic Charities last month. “It’s very hard, but I do love it,” she said through her gentle smile. Working several positions over the years, she noted, “This one hit my heart.” She said people can’t imagine how many homeless there are. “It’s a passion I have for those who are struggling. God tells us to help those in need…” In the past five years in Family Stability, she has helped almost 100 families find housing and get started on a track to financial stability.

“This couple is so special. They’re faith oriented. They’re really in it for their children.” She is impressed by how “grounded” they are in their commitment to their family. “They work with each other to do better, to achieve, become stable and move forward.”

The Sanders are dedicated to their children. Earnest explained, “With the babies, they can’t get up and work. They can’t feed themselves. They can’t clothe themselves…” He had to pause. “That’s what makes us want to do more.” As tears streamed down his face, his voice began to quiver. “You’ve still got to look out for the welfare of your family,” he said. Patrice acknowledged, “Those were the worst days of my life.”

Part of Capetillo’s job is working with clients to developing a savings plan. She meets with families monthly ensuring they have what they need – food, resources for employment or school, clothing, and more. The Sanders lovingly call her “Superman”.

The Sanders are sure of God’s providence. What CCCF gave them was “stability” said Earnest. He said Catholic Charities gave him “fresh air to breathe.” “This is particularly touching”, noted Gary Tester, President of Catholic Charities, “because we pray that we can be a refuge for those in crisis. Psalm 50:15 reminds us that the Lord says “….call upon me in the day of trouble; I will deliver you, and you shall glorify me.” Tester went on “Anita shows compassion through her caring embrace of those we are privileged to serve – she is just one of many incredibly committed Catholic Charities staff members who work tirelessly to be the hands and feet of Christ.”

Patrice looks forward to starting college and pursuing a degree that will help her and Earnest fulfill their vision – to own their own business and home. Patrice and Earnest say they see Jesus “everywhere.” They believe God led them to Catholic Charities and led Capetillo to them. “Since we were faithful… I felt like that’s where our  Lord and Savior came in,” said Earnest. “He knew we needed Miss Anita… Everything done on this planet is done on His watch,” he added.

By Glenda Meekins of the Florida Catholic, October 21, 2020