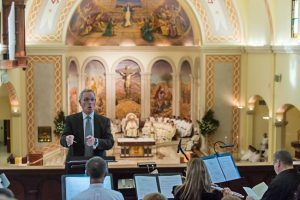 During the Lenten season, the Church offers the faithful many ways to remember and reflect upon the Passion of Christ. Stations of the Cross invite parishioners to walk the Way of the Cross with Jesus and Scripture readings place the people among the disciples and crowds on Good Friday. Several musical presentations scheduled during Lent will offer a unique and beautiful way to encounter Christ: through music.

Charles Thatcher, director of music for the Diocese of Orlando and St. James Cathedral in Orlando will direct “Music and Meditations on the Passion of Christ,” a moving prayer service set to Lenten music, presented by the St. James Cathedral Schola Cantorum on March 24. Musical selections that will be presented are traditionally associated with the Lenten Season, especially the liturgy of Good Friday. The central piece will be a sung version of the Passion according to St. John by the 16th Century Spanish composer, Tomás Luis de Victoria.

“I think that music is an important part of what it means to be human,” said Thatcher. “Music communicates on a level beyond speech, it has the capacity to give expression to profound feelings and emotions, it engages the whole person, and it can express identity as well as bring about unity among people who are gathered together. These are some of the reasons that music is part of the very fabric of liturgical prayer rather than something which simply happens in the background, a decoration, as it were.”

Thatcher went on to explain, “So many of the texts of the Mass and the Liturgy of the Hours are psalms, hymns, and inspired songs… It is part of the nature of all of these texts to be sung, and singing opens up depths of expression and meaning which mere recitation cannot. As we know from Scripture, we follow the example of Jesus when we sing to the Lord. What would Jesus do? He would sing!”

One ancient service that will be presented this Lent is the “Tenebrae” (Latin for “shadows and darkness”) performed by the Basilica Choir of the National Basilica of Mary, Queen of the Universe in Orlando on April 7. Tenebrae is a dramatic service highlighting the gradual extinguishing of candles accompanied by a series of readings and sung choral repertoire, which will leave the Basilica in darkness at the conclusion. The ancient service of Tenebrae originated with the Liturgy of the Hours of Holy Week. Many composers throughout the ages have set music to the texts of Tenebrae.

Pope Pius X’s “Tra le sollecitudini” (Italian for “among the concerns”) noted “sacred music should be holy and true art and universal in order to be effective.” He explained that Gregorian Chant is the only chant inherited from the ancient fathers and therefore is held in the “highest degree.” In recent years, the Church has made an effort to restore this age old tradition and reincorporate it into certain parts of the Mass. The Basilica Choir will also lend their voices to the Good Friday liturgy on April 14 with a cappella music, chanting the Passion of Christ.

However, whether it is Gregorian Chant or a hymn set in a more contemporary form, the goal of music in the liturgy remains the same, to honor, worship and glorify the Lord. The United States Conference of Catholic Bishops’ Committee on Divine Worship describe the transformative power of music in their document “Sing to the Lord: Music in Divine Worship,” “A cry from deep within our being; music is a way for God to lead us to the realm of higher things.”

William Picher, director of the choir at the Basilica of the National Shrine of Mary, Queen of the Universe agreed. “Music gives flight to texts and helps souls to soar toward the divine. Liturgy without music is certainly valid, however music, well executed, brings everything to the next level. Music, if it is well prepared and presented, can bring us a glimpse of heaven like no other art form.”

“Tenebrae with the Basilica Choir”
Basilica of the National Shrine of Mary, Queen of the Universe, 8300 Vineland Ave., Orlando
Friday, April 7, 7:30 p.m.