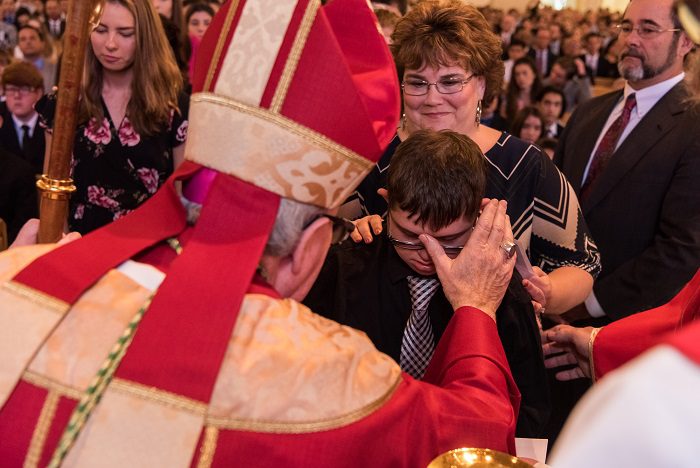 On March 11, 110 students received the Sacrament of Confirmation at Holy Family Parish in Orlando. Each one blessed with Sacred Chrism by Bishop John Noonan to enhance and enliven their own unique Gifts of the Spirit. For Griffin, a 16-year old with Down syndrome, his family, catechist, and faith community, this was a special day arriving after a communal journey of love and caring.

Griffin’s journey was particularly special because his sister, Lilyanna, waited a year to partake in the Sacrament after their move from Connecticut so that the two could receive Confirmation together. She was frequently at his side, helping him with lessons and encouraging him.

“Griffin is a very gentle soul. He’d give you the shirt off his back,” noted his mother, Andrea. “If you were having a bad day, he’d go over and put his arm around you to comfort you… (The Church) It’s a way of life with us. For Griffin and Lilyanna there was an expectation that we would go through the journey.” But Andrea understood that Griffin would need some help.

She worked closely with the parish’s director of religious education, Nora Carbone, and the catechist she selected for Griffin, Sue Esposito. “It was important to me that Griffin be with Sue because I thought she was the best fit. She is an emergency room nurse, so her secular job is one where I know she is very empathetic,” explained Carbone, who prays for the guidance of the Holy Spirit when placing all of her students. Carbone also equipped Griffin’s family with the Loyola Adaptive Kit, a package specially created to assist special needs students with proper learning tools. Carbone explained cards depicting what will happen on the day of Confirmation, including photos of presiders such as the bishop, help reduce anxiety of the unexpected. Other cards help review the responses to the renewal of Baptismal promises so that the confirmand is prepared. Each week Andrea and Lilyanna went through the lessons with Griffin. Carbone also supplied them with a copy of the video series, Chosen, that was being used in class so Griffin and Lilyanna could view it ahead of time.

“It was really a collaborative effort between our trained peer ministers, the parent, the catechist and us overseeing the entire program,” Carbone said. “We’re all God’s children. I do get emotional about it because you really do see how the sacramental life of the Church really enhances the life of these students and children as they move forward.”

For Esposito, to watch Griffin progress over the course of the year, culminating in the reception of the Sacrament of Confirmation was extremely rewarding. She admitted she was nervous at first, but added, “I am a little crafty in my career when trying to get things done. I’ve worked with kids that have Down syndrome so I have some understanding of some of the difficulties they face and the challenges.” Making Griffin feel comfortable was of the utmost importance. “In the classroom, I always made sure he was included, even if his head was down, just so that he would feel welcomed and equal to everyone in that classroom. I’d give him hugs and high fives and he was very receptive,” Esposito said.

Although Griffin does speak, he can be quite shy. While preparing for the Confirmation retreat and the Sacrament of Penance, Lilyanna shared Griffin would likely not communicate with the priest. “It was important for me that he would experience this part of the process, so I decided to figure out a way to make it work for him,” said Esposito. “I took a piece of paper and pencil and told him I was going to write down some of the things he might want to talk to the priest about or at least bring to his attention.” She proceeded to go through a series of questions and scenarios. Griffin would smile and nod yes or no with the help of his sister. Esposito remembers, “They went to Confession Saturday evening and I handed the priest the piece of paper and he was able to go through it with him. He had a big smile and sat Griffin down and then I went and peaked around the corner. He spent some quality time with Griffin and it moved me. I felt good that he was able to have that special moment with the priest.”

The day finally arrived and Esposito recalls, “To watch him walk down there and see the bishop put his hand on his shoulder was a beautiful experience. He’s a child of God. He has specials gifts. Seeing him receive the Sacrament of Confirmation and be brought into that light of the Holy Spirit was perfect.”