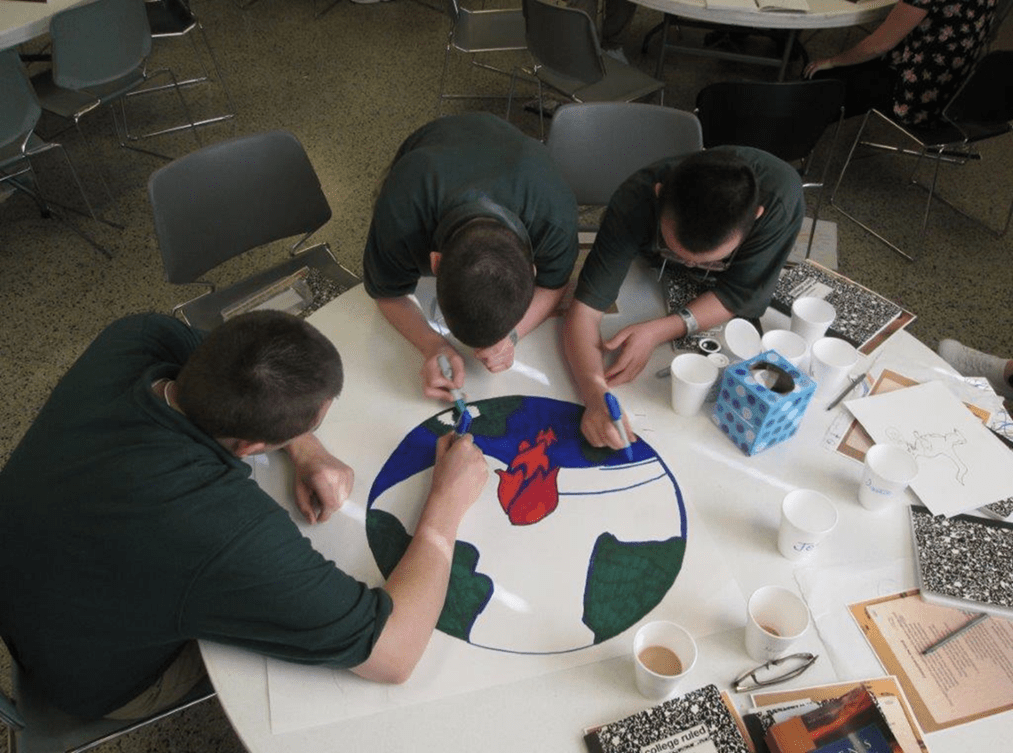 Second in a three part series.

After years of working with adult men, answering the call of Matthew’s Gospel to visit the imprisoned, a federal prison chaplain in Miami requested that Kairos Prison Ministry International, Inc. create a model to give younger inmates a “positive family experience.” The hope was early intervention would change the course of their lives and break the cycle of crime.

Kairos Torch was born in 1997 and launched in a youth facility in Oklahoma to minister to adults 25 and under. There are currently two similar programs in Central Florida, one in Daytona Beach and the other in Orlando. The incarcerated are introduced to Christ’s unconditional love and forgiveness during a weekend retreat. The retreat is followed by six months of mentoring. As youth are still maturing, this “is the most important element” in the process says Our Lady of Lourdes parishioner Brian Seeber, who heads the program for the Daytona Beach Juvenile Residential Facility. The goal is to encourage offenders to see their God-given potential. It is an effort that takes time, God’s time, the definition of kairos.

Seeber and his wife, Lynne, have trained volunteers since 2013 with the encouragement of their pastor, Father Phil Egitto. Don Hartnett is a parishioner and retired police officer who has seen the benefits firsthand. “Once they’re in the system, most write themselves off,” shared Hartnett. “They know that next time, it’s the end of the line. Kairos Torch gives them hope.”

Seeber noted, “What I really like about this ministry is that it is ecumenical in nature… and permits Christians to work together the way Christ intended. Having Christians coming to Our Lady of Lourdes for the extensive training we do (six sessions totaling about 40 hours) is such a wonderful thing…  working together for a common goal shows all of us that we have more in common than that which divides us.”

Virginia Lopez of St. Andrew Parish in Orlando mentors at the Orange Youth Academy, a center with 54 young men and teenagers. Her most memorable adolescent was a 13-year-old boy. “At first he was shy and quiet,” remembered Lopez. On Saturday, the group presented the topic of the many masks we wear as human beings. The mentors shared their testimonies and then gave the group white masks to illustrate with their own stories. Tears flowed as Lopez recalled, “He actually said he’d been physically, mentally and spiritually abused by his parents. The bottom line was he’d rather be there, at the academy, than go home again.”

Gay Taft, a member of Episcopal Church of the Resurrection in Longwood, has worked with Kairos since 2001 and Kairos Torch since 2010. She notes one of the main differences with Kairos Torch is men and women serve as guides after the retreat to strengthen the family environment. “Many of the mentees have never met their own fathers and are already parents themselves,” she said. Modeling a familial setting helps them envision the ideal for themselves and mentoring gives them the tools to carry it out. One of those tools is an exercise known as ‘father forgiveness.’ Through prayer and reflection, participants are invited to forgive their fathers’ failures. They also learn to forgive themselves.

And there is evidence that the program works. One young man wrote a thank you letter saying, “You have truly helped me accept who I am and that what I am going through is all part of the grander plan that God is making for my life and that God does bless the broken road.”

Taft states, “What makes us different is that we come back.” The trust developed in the mentoring process builds bonds of love and mimics God’s love for us.

Another note reads, “I remember the day I walked through a door and there were 10-15 people with big smiles on their face and clapping for me as if I had done something right. It was a feeling of love that I was unfamiliar with for a long time. I felt a change within myself and knew there are people in this world who care about me and love me… Having a mentor, someone I grew close to, to be there for me and help me through my hard times, was something I just could not say thank you (for) enough.”

As government leaders look for ways to avoid the incarceration of youth due to the long-term detrimental effects on their futures, facilities with Kairos Torch in Brevard and Polk Counties have closed. Kevin Resnover, Kairos Torch youth ministry coordinator, explained, “Those of us in the free world make 220 or more decisions a day. Those who are incarcerated make about 22 or less.” This has a profound impact for youth who are in prime developmental stages of maturity. There is currently a program in the works to help troubled youth outside of a prison setting.

In the meantime, Virginia Lopez says, “I will continue to put all my mentees in prayer. Not knowing what happened after they left is hard, but I put them in God’s hands every night.”