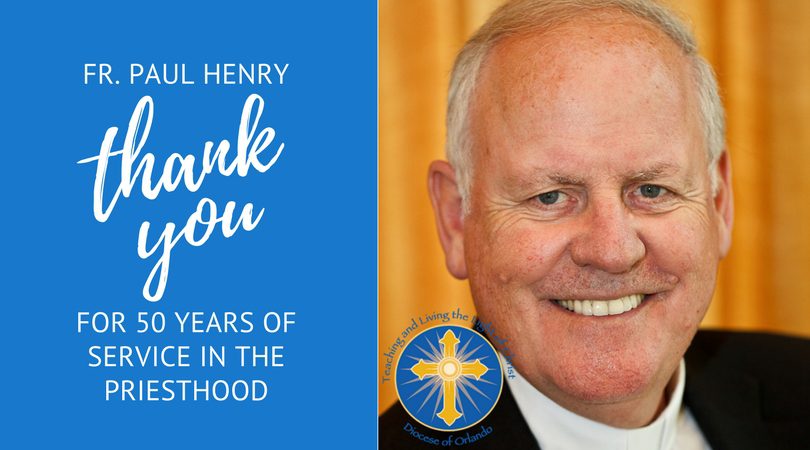 Father Paul Henry grew up in a family of eleven children, including his twin brother Father Peter, in the North of Ireland. The Henrys were “rich in everything but cash” and grew up practicing the Catholic faith together.

“The faith for us was a natural reality. It was in the air we breathed,” remembered Father Henry. “Faith and the desire to serve were precious gifts God gave me through my family.”

This faith-filled upbringing and the example of local priests, inspired Father Henry to consider the priesthood at an early age – and he has never looked back.

“When I was a child I knew that priests were key people in the community. I looked up to them,” recalled Father Henry. “At age 16 it began to occur to me that this would be a very attractive way to go. My desire at a young age to serve God never diminished and I have no regrets.”

Following his Ordination on June 16, 1968, Father Henry came to the newly-formed Diocese of Orlando. He says that each of his assignments have been “unique and satisfying,” including a short time serving as principal of Melbourne Central Catholic High School.

“That stretched my capacities, but it turned out to be a very good thing,” said Father Henry. “Parish life after that seemed like a breeze!”

Father Henry has also served at Our Lady of Lourdes in Daytona Beach, Ascension in Melbourne, Our Saviour in Cocoa Beach, St. Mary Magdalen in Altamonte Springs, St. John Vianney in Orlando and since 2011, as rector of the Basilica of the National Shrine of Mary Queen of the Universe in Orlando.

“At my first Mass at the Shrine, there were 3,000 people in church that Sunday morning. My Lord, that was a bit terrifying!” recalled Father Henry. “But being called to share the faith is about as rich as life gets.”

Father Henry has also enjoyed the opportunity to serve the larger Church through diocesan responsibilities which have included being a member of the priests’ council, priests’ personnel board, and serving as the vicar for priests.

Reflecting on his fifty years as a priest, Father Henry shared, “The greatest blessing of my priesthood has been the feeling that with all my shortcomings God could use me. There has been much joy. Catholicism is a thing of great beauty. Who wouldn’t want to share it? I thank God for my priesthood with all my heart.”