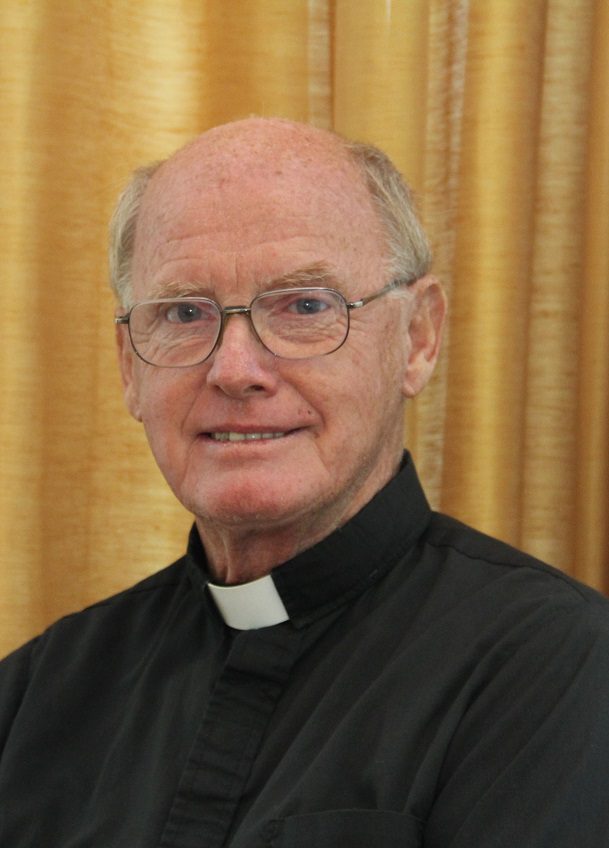 After 50 years as a priest and a teacher, Holy Cross Father Thomas Shea is still moving in the direction God points him, and doing what he loves to do – teach. “I’ve been helping out with Spanish bible studies,” Father Shea said. “I also have been working in Spanish Ministry at Our Lady of Grace in Palm Bay, said the 75-year-old, reflecting on his 50 years as a Holy Cross Father.

Father Shea was born in Albany, New York, in June 1941. He attended St. Vincent de Paul Catholic School through 12th grade. He was taught by Holy Cross brothers in high school. In 1959 he joined the congregation of Holy Cross.

His vocation ‘moment’ came very early to him. “I realized way back in the 40’s I used to play priest. I recited Latin. I had a cousin who was a priest, and my aunt was a sister of St. Joseph. She was a very happy nun,” Father Shea said.

He studied at Stone Hill College in northeastern Massachusetts. When he completed his philosophy degree he was sent to Rome to study theology at Gregorian University. Father Shea had never travelled much, and when he got to Rome it was a whole new world. He was ordained December 19, 1967.

“My superior said why don’t you go to Peru, and I said why not. I started thinking and praying about it.”

Father Shea didn’t know much Spanish, but that didn’t stop him. The priest he was replacing was supposed to stay six months, but left the day after Father Shea arrived. “I started covering his classes right away.”

His students didn’t take advantage of him, but helped him learn Spanish. “They took me out in the streets to learn conversational Spanish. I’m still friends with two of them. They are grandparents.”

Father Shea also received a degree in Peru to train domestic violence counselors. “We had a group of men who worked with domestic violence, what makes (abusers) violent in the home and elsewhere.”

The Holy Cross Fathers sent him back to the United States in 2009, and in 2011 he moved to the community residence in Cocoa Beach, Florida.

“I still go back to Peru whenever I can. My extended family and friends are in Peru, as well as many godchildren. It’s still my home,” he said.

During the time he has to himself, Father Shea enjoys travelling, swimming and reading. “I was very fearful of water when I was 10 or 12 years old. Now I do spiritual reflection when I swim.”

He loves Peruvian food, but it’s not readily available. “In Peru you could head to the marketplace. Here it’s hard to get all of the ingredients to cook Peruvian food. The food here is still a mystery to me,” he said.

Father Shea is very grateful for the life he’s been given. “I loved my 50 years as a priest. I wouldn’t change it. Life has had its ups and downs. It’s been a good ride. Thank you God, the whole thing was a mystery. It was something I wouldn’t have thought I’d be doing. It wasn’t my plan but God’s plan.”