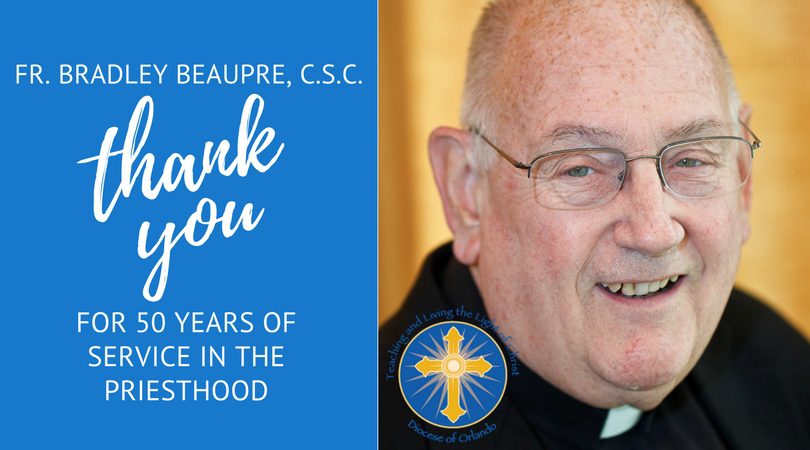 Holy Cross Father Bradley Beaupre was born in Johnsbury, Vermont to Roland and Frances in 1941. Though his mother was not Catholic, his father was and Father Beaupre grew up participating in the celebration of Mass and volunteering as an altar server.

As a senior in high school, while Father Beaupre was dreaming of applying to medical schools, he was mailed a magazine called The Catholic Boy. As he read it, an advertisement for the Holy Cross Fathers caught his eye.

“It said, ‘Be a Teacher. Teach at Notre Dame.’ There must have been a vocation there because from that time on that’s all I looked at,” remembered Father Beaupre. “It had been the furthest thing from my mind.”

With an abrupt change of plans, Father Beaupre entered the seminary at Stonehill College in Easton, Massachusetts in 1959. Nine years later while preparing for his Ordination to the transitional diaconate, he received a surprising letter from his mother.

“It said, ‘I’ve been studying and I understand that a deacon can baptize. So, when you become a deacon I would like you to come home so you can baptize me.”

A few months after baptizing his own mother, he was ordained for the Congregation of the Holy Cross on December 21, 1968.

Over the past fifty years Father Beaupre has been a hospital chaplain, guidance counselor, the first youth ministry director for the Diocese of Portland, Maine, superior at Stonehill College, academic advisor, provincial steward and treasurer, and pastor. In 2008, he came to the Diocese of Orlando as pastor of St. John the Evangelist Parish in Viera and accepted the challenge of building a church for the community.

It took nine-and-a-half years, but Father Beaupre and the parish community welcomed Bishop Noonan on January 20, 2018 when Bishop Noonan dedicated the new church building. Just two weeks after the dedication, Father Beaupre moved to the Holy Cross retirement facility in Cocoa Beach. He will serve as superior of the Holy Cross retirement home, effective July 1.

Looking back on his fifty years of priesthood, Father Beaupre was struck by the many different ministries of which he had the opportunity to be a part, all because he had the courage to say, “yes.”

“I always said, ‘Yes.’ As a result, it has brought me to so many different ministries that I never imagined I would be able to do. If God is calling you to do something, you have to at least give it a shot! It has been a wonderful 50 years – very fulfilling. I wouldn’t ever do it a different way.”