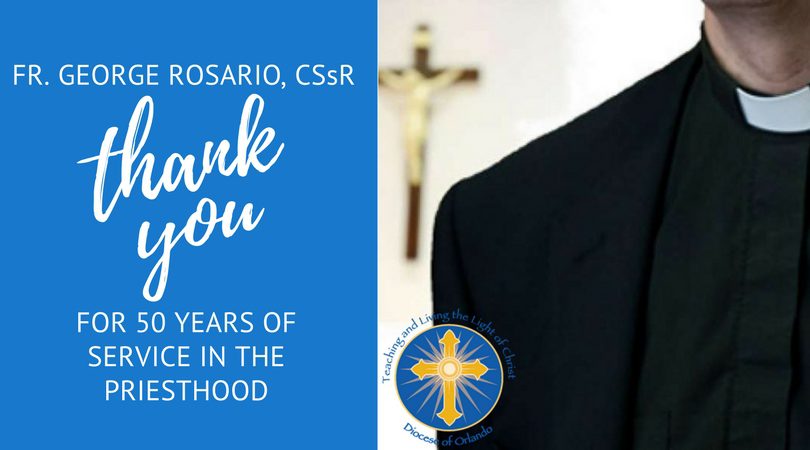 Redemptorist Father George Rosario grew up in Bombay, India. He and his sister were raised Catholic and after high school, Father Rosario attended a Jesuit College. It was there that a simple invitation changed everything.

“When I was in college, I met a Redemptorist priest. He invited me to join the Redemptorists,” remembered Father Rosario. “He said, ‘Come and see.’ So, I went and saw and I liked it.”

For Father Rosario, it was the Redemptorist’s focus on sharing the Word of God through preaching that attracted him to the Order. He was ordained on June 2, 1968 and he has spent the last fifty years traveling the world and sharing the Gospel message.

“God uses people to convey His message,” said Father Rosario. “That’s what I do. I’m more conscious of that now. I am a channel of God’s message to His people.

“In the beginning I moved around a lot,” said Father Rosario, who speaks English, Hindi, and Marathi. “My main job was to preach parish missions, school retreats, and retreats for nuns, priests, and bishops. I’ve travelled to Singapore, Thailand, Ireland, Germany, and Canada. I used to help out at parishes in Bombay, but I was never attached to a parish.”

All that changed in 2012 when the Redemptorist Community in the Diocese of Orlando needed additional assistance and applied to the province in India for help. They approached Father Rosario and asked if he would be interested in moving to the United States to serve as a parochial vicar at Sacred Heart Parish in New Smyrna Beach. Father Rosario gladly accepted and has been serving the Sacred Heart community ever since.

Father Rosario joked that a young man considering the priesthood or religious life should not expect to be living with angels all the time, but added that even with occasional difficulties his life as a priest has been a good one.