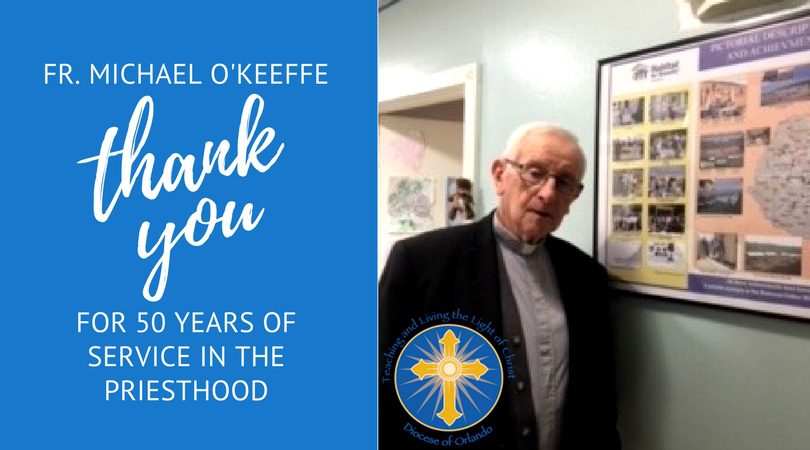 Father Michael O’Keeffe is the oldest of eleven children born to a farming family in Clare County Ireland. He grew up taking care of cows, chickens, and hogs on more than 100 acres in West Ireland. He had two brothers who became priests and a sister who entered religious life, but Father O’Keeffe was an aspiring politician who had a late vocation – at least for the time.

“I was at the age of 28. It wouldn’t be considered late now, but then it was considered late when you didn’t go in after high school,” explained Father O’Keeffe. “God was talking to me, like St. Patrick. I felt he was calling me, ‘Don’t go to politics. There will be plenty of others for that. Come, come to the priesthood.’”

Father O’Keeffe heeded the call and in 1959 he entered Mount Mellerey, a Trappist monastery, to begin studying for the priesthood. While there, he met Monsignor Burke, an Irishman who had been serving in Savannah, Georgia. After hearing Monsignor Burke’s description of the area, Father O’Keeffe desired to go there as well. After his Ordination on June 8, 1968, he travelled to the United States to begin his ministry in the Diocese of Savannah. He would remain there, serving at six parishes, until his retirement in 2002.

With no community for retired priests in the area, Father O’Keeffe joined his childhood friend and seminary classmate Father Pat Sheedy at Blessed Trinity Parish in Ocala. He remains active with the parish and school and celebrates Mass at sixteen nearby assisted living facilities – four each week. Making those visits is one of his favorite ministries as a priest – one of many!

“My favorite thing about being a priest is hearing Confessions, and visiting hospitals and assisted living homes, and radio and television work to gather money for the poor and homeless, and building habitat houses,” Father O’Keeffe said.

Father O’Keeffe says his 50 years have gone by so quickly. He advises young men considering the priesthood to not be afraid. “Just go for it. Pray. Pray with people. Visit the sick. When the phone rings in the rectory at 4 in the morning – go to the nursing home or accident or wherever you’re called. It’s a wonderful life.”