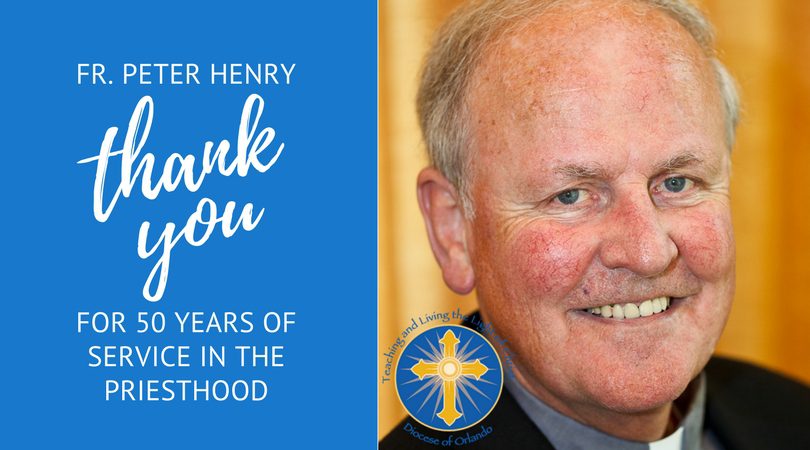 Born into a large extended Catholic family in Northern Ireland, Father Peter Henry’s faith was strongly influenced by his parents, a priest friend of the family, priests at his high school and his two aunts who were religious sisters.

“Faith was very unconsciously at the center of family life and convinced me in my early years that everything beautiful in my life – family life, life’s goodness, God’s goodness, joy and compassion, all such things came to me through my Catholic faith,” said Father Henry.

It was during his final years of high school that Father Henry began to feel a call to the priesthood. In his senior year, he confided to his twin brother Paul that he had mailed off an application to the seminary, only to find out that Paul had mailed in his own application a month prior.

The brothers have continued their journey side-by-side from their studies at All Hallows College Seminary, to their Ordination on June 16, 1968, to their first assignments to the newly-formed Diocese of Orlando, where they have served ever since.

“All Hallows College prepared priests to serve in the English-speaking countries, wherever the Irish emigrated 175 years ago after the great famine,” explained Father Henry. “The thirty priests I was ordained with spread out to Australia and New Zealand, South Africa, the British Isles and the United States.”

Father Henry served two years at St. Charles Parish in Orlando, which was the Cathedral at that time, and then two years at St. Margaret Mary Parish in Winter Park. In 1972, he moved to Holy Name of Jesus Parish in Indialantic where he stayed for fourteen years, first as associate and then as pastor. His next assignment would be an even farther move, to Geneva, Switzerland.

“In 1987, Bishop Grady gave me permission to serve in the international Catholic parish of St. John XXIII in Geneva, Switzerland,” remembered Father Henry. “That was for three to five years initially, but was extended to almost twenty years because I was given additional duties as assistant to the apostolic nuncio to the UN in Geneva for a concurrent period of 10 years.”

When Father Henry returned to the Diocese ten years ago, he was assigned as pastor of St. Ann Parish in DeBary, where he continues to serve to this day.

“I’m very grateful to God for my faith, my family, my vocation and for my diocese. It’s a great diocese; we’ve had a series of wonderful bishops, including and especially our Bishop John Noonan,” reflected Father Henry. “How did I get to be so fortunate?! God is so good.”