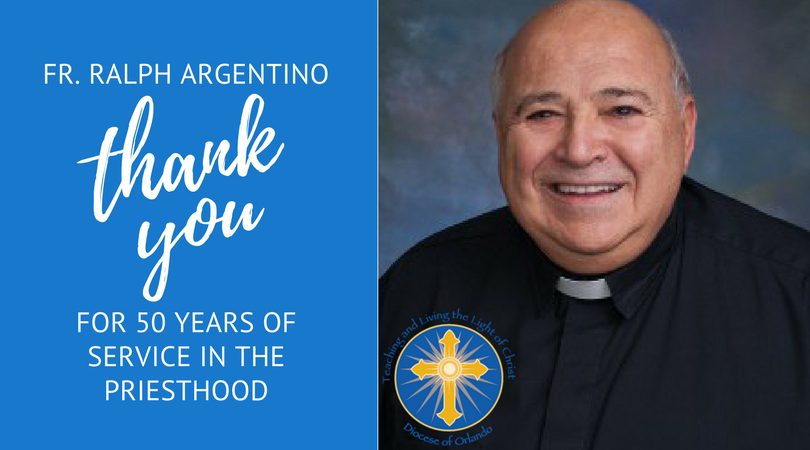 Father Ralph Argentino, a native of Brooklyn, New York, jokes that he first felt a call to the priesthood after giving Joy Behar, host of ABC’s The View, her first kiss in the first grade. At least that’s what he told the audience when he was a guest on the show in 2004. While he did feel a calling at a young age, it was actually not until the fourth grade that the idea of being a priest first occurred to him.

“I was an altar boy at St. Francis Parish in Brooklyn and the priests were very kind, very funny, and looked like they were very happy in what they were doing,” remembered Father Argentino. “That kind of put the bug in me.”

He entered seminary while still in high school and was ordained for the Capuchin Order on June 1, 1968 by Bishop Fulton J. Sheen at Sacred Heart Cathedral in Rochester. Father Argentino remembers Bishop Sheen fondly, but laughs that “he couldn’t sing a note!”

In addition to serving as pastor at a large parish in the Diocese of St. Petersburg, he was also the director of the diaconate program for thirteen years and saw forty-two men ordained to the permanent diaconate. He also served for six years as the director of cemeteries.

“In the St. Pete Diocese I was the director of the Diaconate for 13 years,” Father Argentino explained.
“That was the most rewarding because during my term of office 42 men were ordained to the diaconate. I have three master degrees and one of them was in patrology, the first 700 years of Church history so I taught some Church history to the diaconate – that was fun.”

Reflecting on his fifty years of priesthood, Father Argentino recalls the words of Bishop Sheen at his Ordination, “’A priest is like a sponge that soaks up hatred, prejudice, and bigotry and returns that with love, kindness, and forgiveness.’ I think the greatest accomplishment in my work is trying to do that and trying to help people on their journey to faith.”