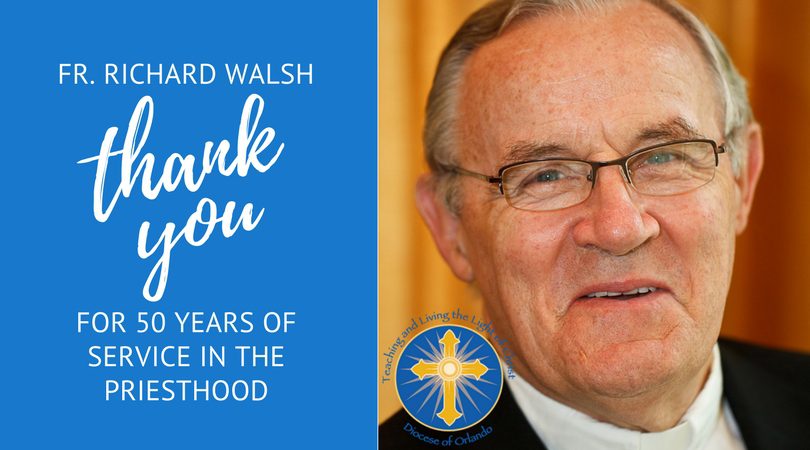 Father Richard Walsh describes his fifty years of priesthood as “a long journey that has gone very quickly.” It’s a journey that began on a small farm in Central Ireland as the youngest of three boys. They were raised Catholic, as was nearly everyone around them, and attended a primary school in a two-room schoolhouse. At the age of thirteen Father Walsh briefly considered a future as a priest, but pushed it to the back of his mind. The calling came back stronger near the end of high school when his father asked, “When you are going to start worrying about what you’re going to do with your life?”

Father Walsh entered seminary after high school and was ordained on June 16, 1968. One week later, the Diocese of Orlando and the Diocese of St. Petersburg were formed and he and his fellow newly ordained classmates, including Fathers Peter and Paul Henry, were sent to serve in Florida. They arrived in August during a typical sweltering Florida summer day.

“I longed for the cool breezes of Ireland! I grew up on a farm and my first assignment was at Our Saviour Parish in Cocoa Beach,” said Father Walsh. “It was all sand and palm trees, no shade. The sun was so scorching.”

On top of the new climate, Father Walsh said he practically had to learn a new language as nearly all his parishioners were engineers or technicians at the Kennedy Space Center. But he soon grew to love his time there and says he has loved every assignment he has received. After Our Saviour Parish he served at St. Margaret Mary Parish in Winter Park, Our Lady of Lourdes Parish in Daytona Beach, and Our Saviour Parish again- this time as pastor. In 1985, he returned to St. Margaret Mary, where he continues to serve as pastor today.

Father Walsh has also served the wider diocese as diocesan administrator during the interim between Bishop Wenski’s departure and Bishop Noonan’s arrival in 2010. He currently serves as Vicar General, head of the priests’ personnel board, and as a member of the priests’ council.

“I think my favorite part is really my interaction with the people at all levels. I enjoy hospital work. I enjoy funerals. I enjoy meeting people in my office. I enjoy standing outside the doors of the church and welcoming people on their way in,” said Father Walsh. “Ultimately the ministry is all about trying to get people in touch with God. Anything I can do to make that a reality is well worthwhile. I’m trying to be servant of the Gospel.”