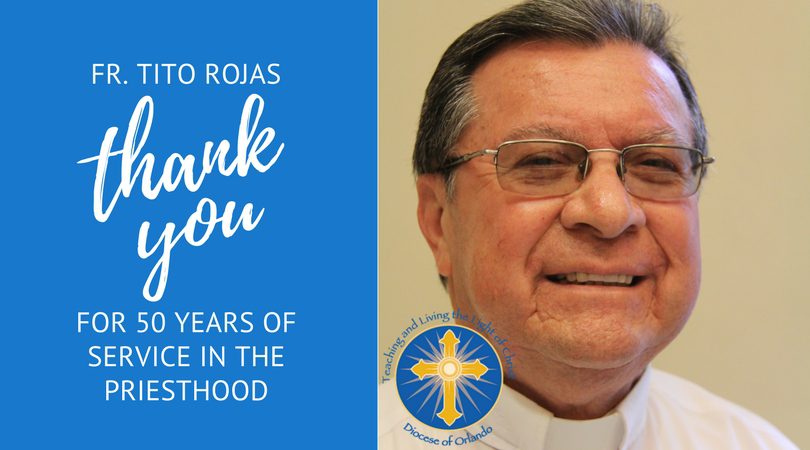 Father Tito Rojas’ vocation did not come as a surprise to his family. One of nine children, he grew up practicing the Catholic faith and was always eager to participate in Mass on Sundays. He paid close attention to everything the priest said and did and afterwards would act out Mass at home. “This boy is going to be a priest!” his parents would remark.

He entered the seminary at age 12 and remained until his Ordination on August 22, 1968. That was a special year because when Blessed Pope Paul VI visited for the International Eucharistic Congress, it was the first time a pope had ever come to Colombia. While there, he ordained 161 priests from all over Latin America.

“I had the privilege to be ordained by Blessed Paul VI. What a wonderful day!” said Father Rojas. “I will never forget it.”

One year following his Ordination, Father Rojas was sent to Rome to study canon law. After receiving his degree, he returned to Colombia for a time before coming to the United States in 1983, first to New York and then to Miami three years later. It was while serving at the Cathedral in Miami that Father Rojas got to know Bishop Norbert Dorsey, who was an auxiliary bishop in the Archdiocese of Miami at the time. When Bishop Dorsey was installed as bishop of the Diocese of Orlando in 1990, Father Rojas followed him here soon after. His assignments included Our Lady of Lourdes in Melbourne, St. Francis of Assisi in Apopka, St. Andrew in Orlando, St. Mary Magdalen in Altamonte Springs and Blessed Sacrament in Clermont. Since his retirement in 2010, he has been assisting at St. Isaac Jogues in Orlando and other area parishes as needed.

“I have been in beautiful communities with people that the Lord has entrusted to me,” said Father Rojas. “I always try to serve others as much as possible.”

“For these 50 years I give gratitude, praise, and thanksgiving for the great gift of vocation and everything God has offered me,” continued Father Rojas. “I am always thanking God for the gift of my vocation to the priesthood and the beautiful things he has given me the opportunity to do.”