The Diocese of Orlando will honor two sisters celebrating golden jubilees during the Sisters’ Mass on October 30, 2010. 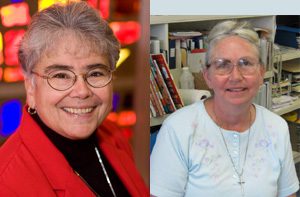 The Diocese of Orlando will honor two sisters celebrating golden jubilees during the Sisters’ Mass on October 30, 2010.

Sister O’Malley is a Sister of Notre Dame de Namur.  She has a master’s degree in education and a master’s degree in counseling. She is also Licensed Marriage and Family Therapist. She taught primary school for several years.  After being trained in the Montessori method of learning, she opened a Montessori preschool at a housing project in .  She arrived at the Diocese of Orlando in 1981 and began ministering at St. Margaret Mary Catholic Church as Director of Family Life and Outreach.  Sister Pat then trained to be an Annulment Advocate.  She ministered as an Annulment Advocate for St. Mary Magdelan Catholic Church and for .  She also ministered in social justice at ‘s Catholic Church, DeBary.  Currently, she serves at Our Lady of the Lakes Catholic Church, Deltona as an Annulment Advocate for .

Sister Eileen Therese Fichtner, is a Sister of St. Joseph. She is a native who attended , in Loretto near where she became well acquainted with the Sisters of St. Joseph. Sister Eileen Therese earned a bachelor’s degree in English from , and continued studies at Barry to achieve a minor and state certification in library science. She received her master’s degree in library science from . She served at St. Mary’s , from 1962 – 1965 and again from 1970 – 1982 and some of her students included children who immigrated from and .  Since 1997, Sister Eileen Therese’s ministry has been as Librarian at in .

We congratulate Sister and Sister Eileen Therese and thank them for their many years of dedicated service to God and God’s people.